Doctors protest outside Dáil warning GP service is in crisis 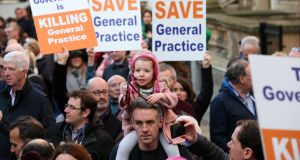 Dr Gareth Linehan from Michelstown, and his daughter Grace (2) at the NAGP protest. Photograph: Laura Hutton

The National Association of General Practitioners (NAGP) has said there is a “crisis” in general practice and unless cuts are reversed “we are looking at the last generation of GPs in Ireland”.

Hundreds of GPs protested outside Leinster House on Wednesday afternoon with placards stating “this Government is killing general practice” and holding stethoscopes in the air.

The rally was organised by the NAGP, which represents more than 2,000 GPs, and is calling for the reversal of Fempi (Financial Emergency Measures in the Public Interest).

Dr Maitiú Ó Tuathail, NAGP president, said there were 26 communities across the country currently without a GP and this would “escalate dramatically”.

He said about 700 GPs were due to retire in the next five years and 70 per cent of practices outside Dublin were not taking on any new patients as they were at capacity.

“The problem is getting closer to Dublin,” Dr Ó Tuathail added.

“It’s certainly worse in rural Ireland and when GPs in rural Ireland are retiring, they’re not getting replaced. But we’re seeing similar problems now in Dublin in the north inner city as well . . . People are saying to us now they are finding it increasingly difficult to get appointments with their GP.”

Dr Ó Tuathail said anything less than “full unconditional reversal of Fempi” would be rejected and only when general practice has been “resuscitated and stabilised”, a new GP contract can be discussed.

The NAGP has said the Government must restore about €160 million in cuts if general practice is to function again and that an extra €400-€500 million is needed to expand the sector and provide extra services such as X-rays for patients.

NAGP chairman Dr Andrew Jordan said the payment per patient had decreased as a result of various cuts by about 38 per cent.

Asked whether GPs were prepared to provide additional productivity in return for the reversal of austerity-era cuts, Dr Jordan said: “That conversation might have been okay a few years ago but now we have an appetite within general practice that they just want the money back.”

“Many of our GPs find they can get better employment, training and job opportunities abroad so they’re increasingly heading to Canada and Australia, so we are exporting a very valuable resource, our highly-trained medical personnel,” he said.

“I would think general practice is beyond breaking point, most of my colleagues in general practice in rural Ireland are working 10-, 12-, 14-hour days, five or six days a week and it’s unsustainable. When younger doctors see that they decide it’s not for them and they go elsewhere.”

“We need to be resourced, we’re not being resourced. We’re getting extra work to do but without the back-up to employ staff or to resource IT, or anything like that,” she said.

“It’s just not coming. We need to get people to sit up and pay attention.”

Dr Kerr Livingston, from Kilbarrack, north Dublin, said “it just gets harder and harder to do the job”.

“We’ve had no good news for 12 or 13 years now. It’s just getting harder and harder to provide the services we want for the patients.”