Some 30,000 people could potentially be affected by postponement, says HSE chief 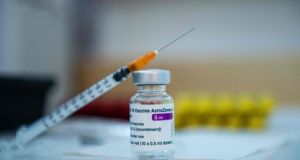 The National Immunisation Advisory Committee (Niac) has recommended that the administration of the AstraZeneca Covid-19 vaccine be temporarily deferred from Sunday morning.

Deputy chief medical officer Ronan Glynn said the recommendation was made “following a report from the Norwegian Medicines Agency of four new reports of serious blood clotting events in adults after vaccination with Covid-19 Vaccine AstraZeneca”.

He said the Niac would meet again on Sunday morning and issue a further statement after.

Speaking on RTÉ’s This Week programme, Dr Glynn said the cases were in younger people in their 30s and 40s “and we were were very aware that this week we were due to roll out the AstraZeneca vaccine to many many people at high risk and with significant underlying conditions”.

He said it was on that basis that the Niac “felt that they had no option other than to make a recommendation to temporarily pause the programme”.

Dr Glynn stressed that “it’s very important to reassure people that there is no evidence of a cause and effect at this point. We have a safety signal, and when we get safety signals we have to act on those. Then proceed on the basis of precautionary principle.”

He said he was hopeful that as the week goes on “we’ll get more reassuring data from the EMA (European Medicines Agency) and we can we can recommence the programme”.

Asked his advice to people who have had a first dose of AstraZeneca he said it was not unusual “to feel tired, to have muscle pain, joint pain, fever in the 24 to 48 hours, after having received your vaccine”.

But he said “if they feel unwell more than three days after vaccination and particularly if they notice blue spots on their skin, they should continue to consult a doctor”.

But he added that “these are these are rare, rare events”.

Speaking on the same programme HSE chief clinical officer Colm Henry said “we need to retain the confidence of the public in the vaccine” and that was why they had to act on “safety signals” and “be seen to investigate it thoroughly”.

Dr Henry said that approximately 30,000 people could potentially be affected by the postponement of the AstraZeneca vaccine, especially “health care workers and to some extent, those in Category 4, aged between 16 and 69 who have high-risk conditions”.

To date, the Health Products Regulatory Authority (HPRA) has received a small number of reports of blood clots. But none of these are of a nature similar to those alerted by the Norweigan agency on Saturday.

Niac chairwoman Karina Butler said on RTÉ radio that the Norwegian medicine agency informed the authority of a “cluster of four serious, very rare, very serious clotting events not the kind of the usual clots in the legs but actual clots involving the brain or vessels that would normally be involved and in younger people.

“So, looking overall it was a number of these very small but very rare serious events in people that you might not otherwise expect it that raised a signal, a safety signal.”

She hoped that the reports in Norway were just an overreaction and that a decision would be made concerning the safety of the vaccine within the week.

In a statement at lunchtime, the Niac said “to date, no reports of similar events have been received by the HPRA. Over 117,000 doses of Covid-19 vaccine AstraZeneca have been given in Ireland”.

The four cases reported were of “serious, rare thromboembolic [clotting] events, including some complicated by thrombocytopenia [low platelet count] in adults under 65 years of age after vaccination with Covid-19 vaccine AstraZeneca”.

Niac said these rare cases “have usually occurred within 14 days of the Covid-19 AstraZeneca vaccine”.

However, on Sunday AstraZeneca said it had conducted a review of people vaccinated with its vaccine which has shown no evidence of an increased risk of blood clots.

The review covered more than 17 million people vaccinated in the European Union and United Kingdom.

“A careful review of all available safety data of more than 17 million people vaccinated in the European Union and UK with Covid-19 vaccine AstraZeneca has shown no evidence of an increased risk of pulmonary embolism, deep vein thrombosis or thrombocytopenia, in any defined age group, gender, batch or in any particular country,” said the company.

Opposition to be briefed

Minister for Health Stephen Donnelly is to arrange a briefing for Opposition health spokespeople in the wake of the vaccine suspension.

Norwegian health authorities said on Saturday that three health workers in Norway who had recently received the AstraZeneca Covid-19 vaccine were being treated in hospital for bleeding, blood clots and a low count of blood platelets.

Norway halted the rollout of the AstraZeneca vaccine on Thursday, following a similar move by Denmark. Iceland later followed suit.

“We do not know if the cases are linked to the vaccine,” Sigurd Hortemo, a senior doctor at the Norwegian Medicines Agency told a news conference held jointly with the Norwegian Institute of Public Health.

All three individuals were under the age of 50.

Before Denmark and Norway stopped their rollout of the AstraZeneca vaccine, Austria stopped using a batch of the shots while investigating a death from coagulation disorders and an illness from a pulmonary embolism.

The EMA said on Thursday the vaccine’s benefits outweighed its risks and that it could continue to be administered. Europe is struggling to speed up a vaccine rollout after delivery delays from Pfizer and AstraZeneca, even though new cases have spiked in some countries. - Additional reporting Reuters