No additional deaths and 821 further cases reported as 4,164 more vaccines given 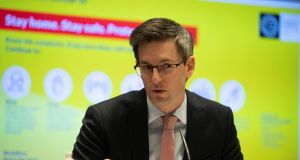 Almost 250 Covid-19 cases have occurred in outbreaks among third-level students in Galway and Limerick despite colleges being largely closed, according to public health officials.

In Galway, 135 cases have been confirmed among students, along with 35 suspected cases. Another 30 students were being tested on Monday.

There have been 15 clusters, with the number of cases in each ranging from two to 40, a National Public Health Emergency Team briefing was told.

Mixing between households was “definitely” a factor in many of the outbreaks, according to clinical director of the Health Protection Surveillance Centre Lorraine Doherty.

In Limerick, where the university is offering testing, 120 students have tested positive.

Most third-level courses are being taught online due to the pandemic. But some students have to attend workshops and other practical elements of their courses. In addition, many are staying in student accommodation rather than with their families.

Dr Doherty also expressed concern about the number of workplace outbreaks. She said people were still coming to work when sick, while others were not paying attention to social distancing and mask wearing while in work.

She called on employers to focus on these issues and to appoint Covid leads from among staff to heighten adherence to infection-control rules.

Workplace outbreaks are occurring in a range of settings, including manufacturing, meat plants and offices, according to deputy chief medical officer, Dr Ronan Glynn.

There are three new clusters in meat plants last week and 29 outbreaks in the sector remain open, or under investigation.

No new deaths of Covid-19 patients were reported by the National Public Health Emergency Team on Monday (Nphet). This leaves at 3,948 the total number of deaths in the pandemic.

The team also reported 821 confirmed cases of the disease, bringing to 210,402 the total number of cases in the Republic.

The 14-day incidence of the disease now stands at 272 cases per 100,000 people nationally. Monaghan has the highest county incidence, followed by Dublin.

Nphet’s Prof Philip Nolan said continued progress was being made to suppress the virus. However, the rate of decline is slowing down, and there is a “considerable distance” to go.

The number of new cases declined 16 per cent last week over to the previous week, compared to falls of 20 per cent and 40 per cent in the preceding weeks.

The incidence among older people is reducing but has risen slightly among younger people, possibly due to the resumption in testing of close contacts.

The proportion of cases in Dublin and other cities is also rising, Prof Nolan noted.

The figures come as the Government is drafting a new strategy for living with Covid-19 which will set out plans for a staggered return of construction and a slow return to schooling while maintaining a prohibition on indoor house visits and hospitality.

Sources involved in the process say that while no dates will be explicitly set out for the reopening of society and the economy, increased vaccinations should allow for progress in May or June.

Industry sources believe that the hospitality sector may only begin reopening on an outdoor basis from the May bank holiday onwards with a phased reopening for indoor settings as the summer months progress, depending on the level of virus in circulation.

Mass gatherings of more than 50 people are unlikely until a large swathe of the population have been vaccinated, with the Government cautiously optimistic about this being achieved in September.

On Monday the locations of the 37 Covid-19 mass vaccination centres set to be established across the State were published by the Department of Health.

The sites chosen include places such as sports stadiums, GAA clubs, hotels, university sports centres and a golf club.

There is at least one in each of the 26 counties with five sites in Cork, four in Dublin and two in Kerry, Wicklow, Westmeath and Tipperary.

While inoculation of the first three priority groups in the rollout had taken place in care centres and hospitals, future phases will take place in these centres.

Minister for Health Stephen Donnelly on Monday said he was hopeful that, as supplies increase, the State will soon be able to vaccinate some 250,000 people a week.

“These centres will support the vaccination of the general population in a safe and efficient manner,” said the department.

“While currently vaccines are being administered in healthcare settings and by GPs, many people will be offered their vaccination in these centres, having self-registered online.”

Mr Donnelly said people “can expect to see these vaccination centres ready and waiting in their county. We have always said the vaccination programme would only be limited by the availability and reliability of supply in these early stages of the programme. In the coming months supply will increase substantially and we will see these centres operating to full capacity and administering vaccines to the general population, following the Government priority list.”

Elsewhere the number of coronavirus-related deaths recorded by the North’s Department of Health has reached 2,000.

The deaths of four more people with Covid-19 were reported by the department on Monday.

A further 234 people tested positive for the virus.

In the North’s hospitals 477 people are receiving treatment for Covid-19, with 59 in intensive care.