Illegal casinos have been told they must serve meals. Is this how we stop Covid-19? 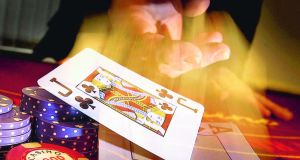 This is Ireland 2020. It is more important to check on whether a substantial meal is consumed by a member of the public drinking in an illegal casino than it is to close the unlawful casino and uphold the law of the land. Photograph: Danny Lawson/PA.

Tempting though it might be to add here to the condemnations concerning Boris Johnson’s perfidious Internal Market Bill, I will repose my hope (if not my trust) in the House of Lords to prevent Britannia Waives the Rules from becoming the finale sung at next year’s BBC Proms.

We have more immediate problems on hand this week: higher than expected Covid infection rates, widening chasms in the public finances, and growing unease among the public about the effectiveness of NPHET and the HSE’s capacity to take practical steps to prevent a second wave of the virus swamping the hospital system.

The HSE was repeatedly warned about the need to increase our ICU capacity long before Covid-19 was ever heard of. A doubling of ICU beds was called for back in June. The Dáil’s Covid committee was recently told that there was “sanction” for additional ICU capacity. Sanction?

Can someone not broadcast a programme or publish an article that tells us exactly what has happened on ICU capacity since March? Surely we could be given a clear picture of what has been done and what is being done.

Meanwhile, the Department of Health published new regulations requiring a record of each meal served in restaurants and pubs to each individual customer. And then we had the spectacle of a public denial that such a record was required. It was wrongly suggested that a single till receipt per party would suffice. Licensing law expert Constance Cassidy SC had to put the record straight on what the law now actually required.

Given that the department was so confused about its own regulation, I had a look to see what else was to become enforceable by regulation under the new Garda closure powers rushed into law last week. Statutory Instrument 326 of 2020 makes very interesting reading.

The regulations make it a crime for a person in control of a “a casino or private members’ club at which gambling activities are carried out and which is operated on a commercial basis” to allow access to such premises to consume alcohol other than with a substantial meal worth at least €9.

There is a major problem here.

A private members’ club is not allowed to serve alcohol to its members or guests unless it is registered under the Registration of Clubs Acts. For registration it must be a bona fide members’ club, not a body under the management of a person operating it as a business – for instance to carry on gambling “on a commercial basis”.

So how can the supply of drink with food occur in a “casino” when casinos are prohibited in Ireland? Likewise, what bona fide private members’ club carries on gambling activities on a commercial scale?

The sad fact is that there is now a rash of premises describing themselves as casinos or masquerading as bona fide members’ clubs when in fact they are carrying on the activity of gambling on a commercial basis.

Why does the Department of Health make regulations for activities which are completely unlawful?

Whether you term your premises a “casino” or an “amusement arcade”, it is illegal to run it unless the local authority has adopted a resolution permitting such arcades. In Dublin, for instance, the City Council has no such resolution. It rescinded its authorisation back in the 1980s. And yet there are many such premises in operation in flagrant breach of the law. All of them have gaming machines in breach of the law. Most of them have ATMs to facilitate gambling.

The Garda seems to be turning a blind eye to these self-styled casinos. The Revenue Commissioners even issue individual licenses for each gaming machine in such casinos or arcades without checking whether the local authority has permitted the premises to operate – such as is the case in, say, Bray or Bundoran.

There is no limit on what impoverished gambling addicts can spend in such unlawful gambling dens.

Why is the law not enforced?

Why does the Department of Health make regulations for activities which are completely unlawful?

This is Ireland 2020. It is more important to check on whether a substantial meal is consumed by a member of the public drinking in an illegal casino than it is to close the unlawful casino and uphold the law of the land enacted to protect gambling addicts.

I would be a lot more confident in NPHET and the HSE and the Department of Health if I saw any tangible and clear evidence that we used the half year since March to substantially increase our ICU capacity and that we really have established a testing and tracing system that gives results within 36 hours.

Many people have not forgotten the erroneous advice given to nursing homes and the advice that masks – which are now obligatory – were risky.

We need clarity on the real issues. We could start with the facts on strengthening our ICU infrastructure.