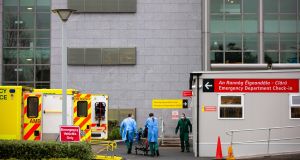 A further 79 coronavirus-related deaths have been reported in the State.

Of the deaths, 78 happened in January. The median age of those who died is 82 years and they ranged in age from 56 to 98 years.

As of 2pm on Saturday, 1,492 Covid-19 patients were hospitalised, of which 211 were in ICU. Nphet said there had been 55 hospitalisations in the past 24 hours.

Earlier, Health Service Executive (HSE) chief executive Paul Reid cautioned that ICUs would remain “close to their limits for some time yet”.

Chief medical officer Dr Tony Holohan said: “We have experienced over 1,000 deaths and more than 100,000 cases this month.

“We have reported more cases in one month than we experienced throughout 2020. This shows just how quickly this disease can spread and how much it can impact public health,” he said.

“The efforts by all of the population in following the basic public health advice has seen us reduce the incidence of the disease very rapidly compared to most countries in Europe.”

Dr Holohan said despite the recent significant decrease in cases, there remains a level of infection in the population which is double that seen at the peak of incidence last October.

“The next few weeks need to see us maintain compliance with all of the measures that are in place so that we can get to levels of the disease that are as low as possible,” he added.

The 14-day incidence of the disease has fallen to 575 cases per 100,000 people nationally. Monaghan has the highest county incidence, followed by Louth and Waterford. Leitrim has the lowest incidence.

Meanwhile, a public awareness campaign surrounding the rolling out of the community vaccination programme will begin this weekend.

The Oxford-AstraZeneca vaccine was approved for use in all adults over the age of 18 by the European Medicines Agency (EMA) on Friday. Its approval had been uncertain after German authorities did not recommend it for people over the age of 65, citing insufficient data.

The first doses of the vaccine will arrive in Ireland in the week beginning February 8th with the vaccination programme starting shortly after that.

The AstraZeneca vaccine does not require the kind of super-chilled storage the Pfizer-BioNTech and Moderna doses do, which is why it has been seen as game-changer in the vaccine rollout.

It will be rolled out at mass vaccination centres, GP surgeries and chemists.

The National Immunisation Advisory Council, responsible for giving advice on how to use the vaccine in Ireland, will meet over the weekend to review the data and EMA’s recommendations, with advice expected in the Department of Health early next week.

The department said on Friday it now expects to receive 1.1 million vaccines by the end of March, 300,000 less than was first expected, because of a fall-off in supply from AstraZeneca.

This will see the number of those who are being vaccinated in the first quarter drop from 700,000 to 550,000, based on each person receiving two doses.

The HSE expects to vaccinate about 150,000 people in the first two priority groups, nursing home residents and staff and frontline healthcare workers accounting for 300,000 vaccines. As of Wednesday, 161,000 people had been vaccinated and of those 13,500 have received both doses.

There are 496,000 people to be vaccinated in the third priority group of those over the age of 70. Going by supplies, it appears there will only be enough vaccines to vaccinate 400,000 people aged over 70 in the first quarter, meaning 96,000 people over that age will not be vaccinated until the second quarter.

In a statement, Minister for Health Stephen Donnelly acknowledged the “frustration” many felt by the supply constraints of the vaccination programme.

He anticipated that supply lines would become “more robust and established” once other vaccines, including the single dose jab being developed by Johnson & Johnson comes on stream.

“We will continue to adjust the programme in accordance with supply and the prioritisation and allocation strategy,” he said.

“Every effort will be made to deliver the vaccines as rapidly and safely as possible.”

Speaking on the Brendan O’Connor Show, Prof Luke O’Neill said he anticipated a 90 per cent drop in deaths once the elderly are vaccinated.

Meanwhile, Dr Cillian de Gascun, chairman of the National Public Health Emergency Team’s Covid-19 expert advisory group, said 63 per of cases were identified as the UK variant last week and that it was the “dominant variant in Ireland at this point in time”.

The director of the National Virus Reference Laboratory said 1.2 per cent of overall cases had been sequenced but that recent guidance from the European Centre for Disease Prevention and Control and World Health Organisation suggest this needed to be closer to 5 to 10 per cent.

“We need to scale up to get to that level over the next two to three months so this is something that we’ve been discussing at Nphet since before the turn of the year but obviously the diagnostic capacity became the priority over the turn of the year,” he told RTÉ radio’s Saturday with Katie Hannon.

Separately, he said he agreed with Nphet’s view of the impracticalities of implementing a zero-Covid strategy.

“But I think it’s really important that we don’t see them as a binary option, it’s not black and white and it’s not a choice of one or the other,” he added.

Dr de Gascun said when Covid-19 cases and positivity rates dropped last summer the problem was “we didn’t have the public health structures in place to control it at that level”.

He said Nphet and zero-Covid advocates “want a lot of the same things in relation to controlling the virus” but that he didn’t think “locking borders and restricting access completely” would be sustainable longer term.