Process takes average of nine days says HSE, but experts say this must be within 72 hours to stop spread of virus 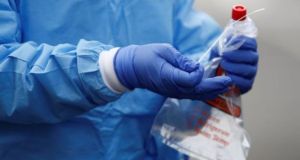 Experts say trace and testing must be done within 72 hours to stop spread of virus; HSE says process takes nine days on average

Testing people for Covid-19 and tracing all their contacts is taking an average of about nine days, according to the Health Service Executive (HSE), a multiple of the time most experts say the process needs to be to stop the virus spreading.

The median time from referring a person for a test to sending the result for contact tracing is five days, according to David Walsh, HSE national director of community operations.

The average time taken to then trace all the contacts of a confirmed case is four days, Mr Walsh told a National Public Health Emergency Team (NPHET) briefing, although “straightforward” cases are dealt with more quickly.

Mr Walsh said this was “an improving figure” and would shorten with the automation of the process in relation to negative results.

Prof Mary Codd, an epidemiologist at University College Dublin (UCD) and head of the contact tracing centre on the campus, said it was vital test results for Covid-19 were turned around within 48 hours by the time people return to work next week.

The entire testing process must come to within 48 hours, or certainly no longer than 72, in order to cut out the spread of the virus in the population, she said. “Otherwise actually we are likely to be looking at these sporadic outbreaks that may not be able to be contained.”

The process of sampling, testing, communication of results to a positive case, contact tracing and quarantine of contacts needs to be done within 72 hours, immunologist Dr Tomas Ryan of Trinity College Dublin has also said.

Silicon Valley entrepreneur Tomas Pueyo, whose analyses of the crisis have been shared by millions online, said: “If you take on average three days from infection to track contacts and quarantine or isolate them, you will miss a lot of contagions.”

The Mental Health Commission said on Monday that mental health services in Cork and Kerry, and south Dublin, were awaiting test results from up to two weeks ago, while services in the northwest, southeast and south Dublin/Kildare were waiting more than a week.

Mr Walsh said the HSE’s target for testing turnaround times was “three days or below”. By the end of this week, the time it takes should be down to four days and process improvements would then be undertaken to reduce it further.

The figure could also be improved if people experiencing symptoms responded earlier by seeking a test, according to Dr Holohan. He said an average of four days passed between the time a person experienced symptoms consistent with Covid-19 and the time a sample was taken.

“Our message is that if you are experiencing symptoms, don’t wait until tomorrow to see if they go away,” he said, adding that people also needed to self-isolate immediately if this happened.

On average, tests processed in hospitals are turned around a day faster than those done in other labs, Mr Walsh said. The average turnaround time for lab tests was three days last week and would be two days this week.

Despite the five-day period elapsing from referral to the start of contact tracing, Dr Holohan said he was satisfied the information provided was “real-time experience” on which decisions could be based.

The mean number of contacts a case has currently stands at two.

The deaths of another 15 patients were announced by NPHET at its briefing on Monday, the second-lowest figure in over six weeks. There have now been 1,467 Covid-19 related deaths in the Republic.

Some 139 new cases of the disease were also reported, including 60 notifications in the past 24 hours. The new cases bring the total number of cases to 23,135.

NPHET is developing guidelines on the wearing of face-coverings in some settings but Dr Holohan said the proposals would not be mandatory.

Meanwhile, the Northern Executive is to announce a five-stage easing of the coronavirus lockdown in Northern Ireland on Tuesday. It is expected to differ from the Republic’s roadmap in that there will be no specific dates set down for when particular easings will take place but each stage of process will be determined by scientific and public health criteria.