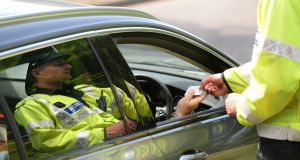 After the Taoiseach announced the more restrictive public health advice, An Garda Síochána began stopping people to question them about their movements but they had no additional powers. Photograph: Dara Mac Donaill

The regulations necessary to allow An Garda Síochána arrest people who are not complying with Government policy on social distancing are expected to be signed shortly, possibly as early as Wednesday.

Minister for Health Simon Harris is to sign the regulations which will give the gardaí extensive new powers including the power to enforce a cordon around a designated geographical area, or arrest anyone who impedes a Garda in implementing the provisions of the Covid-19 emergency measures.

The regulations are required for the coming into effect of the new powers contained in the Emergency Measures in the Public Interest (Covid-19) Act 2020, which recently completed its passage through the Dáil and the Seanad.

The law allows that a person who refuses to comply with an instruction by a garda who is seeking to impose the social distancing rules, is guilty of an offence that can lead to a prison sentence of up to six months.

The new law also allows for the shutting down of gatherings or events, including religious gatherings, and for ordering groups in certain areas to stay in their homes, or other places, if necessary.

A person who refuses to self-isolate after a medical recommendation that they should do so can be convicted of an offence that will have a maximum penalty of three months in prison.

Gardaí may also, working at the request of health or other officials, take a person to a particular place, or break and enter a particular property.

It is expected they will reflect the advice issued by the Government last week, such as that people should not venture more than 2km from their home save in certain circumstances.

After Taoiseach, Leo Varadkar, announced the new, more restrictive public health advice on Friday, An Garda Síochána began stopping people to question them about their movements.

However, there is nothing in law as yet that would allow gardaí prevent a person, for instance, going for a cycle more than 2km from their home.

“The gardaí had no additional powers, so if someone had said, I’m not going to comply with your request, there was little that could have been done,” according to Doireann Ansbro, senior research and policy officer with the Irish Council for Civil Liberties (ICCL).

“It’s a really crazy time from a civil liberties point of view, but the ICCL fully understands that this is a public health emergency and that some people are doing things they shouldn’t do.”

Ms Ansbro said that defining who is engaged in essential services and is, therefore, more free to travel to and from their homes, will be one of the challenges faced by those drafting the regulations.

Last week the legal section of An Garda Síochána issued advice to members about the powers that already exist and that might be of relevance to the pandemic.

One of the laws cited was the 1994 Criminal Justice (Public Order) Act, which can be applied where groups of individuals are congregating in a manner that offends social distancing rules, the note said.

A section of the law says that where a person is acting in a manner that creates a reasonable concern for the safety of others, a garda can ask that person to move on, and the person is guilty of an offence when he or she does not comply.

The Act “creates an offence which members ought to consider in the context of the threat to the safety of persons arising from the Covid-19 pandemic”, the note said.

“Members should consider a graduated response to any incidents arising which offend social distancing rules. If a situation arises which is of a more serious or threatening nature, members may wish to consider whether offences have been committed” under other sections of the Act concerning threatening, abusive or disorderly behaviour.

The note referred to reports of people spitting at others in the context of the pandemic, and said this could constitute an offence under the 1997 Non-Fatal Offences Against the Person Act, including under sections governing threats to kill or cause serious harm, or the endangerment of others.

“These sections were not introduced with a scenario arising from the purposeful spread of an infectious disease in mind. However, in the absence of any other legislation, members may wish to consider whether an offence under either provision is made out,” the note said.

The President of the Garda Representative Association, Jim Mulligan, has called for a specific Garda policy of always opposing bail in cases where someone is charged with offences connected to the “weaponisation” of Covid-19.

He said there have been several incidents of gardaí being coughed at, spat at, and threatened by people claiming to be infected with the virus.

He said the gardaí would prefer not to be telling people what they can’t do and to be inquiring into their business, but the social distancing rules had to be implemented in the national interest, he said.

“At a time when the whole country is putting their shoulder to the wheel to save lives, it is essential that everyone pushes in the same direction. Anything that undermines this national effort is nothing other than unpatriotic.”

In a meeting on Wednesday to discuss the policing of the social distancing regime, the association will be asking the Department of Justice about the supplying of personal protection equipment, including facemasks, to Garda members.