Care processes at Portlaoise hospital at risk of ‘collapse’

Urgent correction and reconfiguration is needed, according to unpublished review 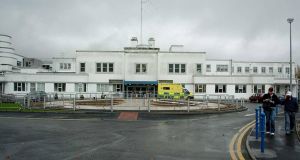 Portlaoise hospital: the report says the hospital is “not set up to provide safe acute and elective surgery”. Photograph: James Flynn/AP.

“Urgent correction and reconfiguration” is needed to avoid the “collapse” of care processes at Portlaoise hospital, according to an unpublished review of medical, surgical and emergency services there.

The report is likely to pose a major political headache for Minister for Health Leo Varadkar, as any diminution of services at the hospital will be strongly opposed in the midlands. A similar downgrading of Roscommon General Hospital three years ago resulted in a major backlash against the Government.

A HSE spokesman said yesterday there were no plans to reduce or remove emergency cover at Portlaoise.

The situation had been “stabilised” since the report was completed through the employment of additional staff, the introduction of a National Early Warning Score to monitor patient deterioration and new bypass protocols in paediatrics.

The report says the hospital is “not set up to provide safe acute and elective surgery” because there is insufficient work volume to ensure surgeons can maintain the necessary competence and expertise. It adds: “The provision of additional staff resources will not change this.”

The review recommends closing the 24-hour emergency department and replacing it with a medical assessment and paediatric assessment unit, open between 8am and 8pm, and a local injury unit.

The existing critical care facility would also be discontinued. Seriously ill patients would be sent to other hospitals in the Dublin Midlands Hospital Group.

The report says Portlaoise’s role as a day-care surgery, endoscopy and surgical outpatient department should be developed. This move to providing high-volume, low-complexity services in smaller hospitals is similar to the changes made, with some success, in Roscommon and Mallow.

“The many internal medical challenges evident are individually serious and, when combined, have the potential to lead to poor performance, pose significant risk issues to patient care and staff wellbeing and require urgent correction and reconfiguration to avoid further deterioration and potential unplanned collapse of several care processes,” said the report.

Last February, a report by Department of Health chief medical officer Dr Tony Holohan found maternity services at the hospital could not be regarded as safe and sustainable under current governance arrangements. This report was commissioned in response to concerns over the handling of a number of child deaths, which were highlighted by an RTÉ Prime Time programme in January.

Dr Holohan called on the HSE to address the implications of his report for other (non-maternity) services in Portlaoise.

The HSE appointed new managers and commissioned a six-person team to review medical, surgical and emergency services. The Health Information and Quality Authority also began an investigation; its report is due before the end of the year.

Mr Carter was subsequently moved to other duties and replaced by Dr Tony O’Connell. Dr O’Connell has told staff the hospital has a “vital future” within the hospital group.