Cancer cases set to double by 2040 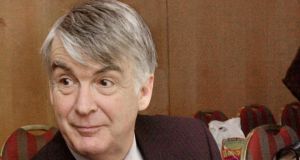 “The message is that we are almost certainly going to have twice as many cancer patients in 2040,” says Dr Harry Comber, director of the National Cancer Registry. Photograph: Matt Kavanagh

The incidence of cancer in Ireland is set to double by 2040, according to projections by the National Cancer Registry.

Increases are projected in all cancer types, with the exception of leukaemia in males.

Over-70s
Dr Harry Comber, director of the National Cancer Registry, said the “main driving factor” behind the projected increase was the predicted population increase in the over-70s group. CSO statistics indicate that the number of people in this age cohort is set to grow by more than 125 per cent by 2040.

The projections indicate that skin cancers – both melanoma and non-melanoma – are set to increase most rapidly in the 35-year period covered by the cancer projections.

Lower awareness
Dr Comber said the figures were based on an increase in skin cancer prevalence over the past 10 years, a trend that may be explained by a lower awareness of skin cancer in the past.

Meanwhile, the incidence of lung cancer is projected to rise more rapidly among females by 2040.

According to one of the statistical projection models used by the researchers to predict future cancer trends, lung cancer prevalence could increase by 136 per cent among women by 2040, compared with 52 per cent in men.

Smoking habits
However, Dr Comber said changes in smoking habits may yet influence these figures, meaning the figures for lung cancer “may be smaller than we project”.

“The message is that we are almost certainly going to have twice as many cancer patients in 2040. Not only are we going to have more cancer patients but those patients are going to be older on average, so we need to start thinking about how we can cope with that in terms of cancer services, treatment services and aftercare services,” Dr Comber said after the release of the projections yesterday.

Reducing obesity
However, he said that there were steps that individuals could take to help influence cancer incidence: “If we start acting now we can influence cancer figures in 15 to 20 years’ time and these are changes that we are all aware of: reducing smoking, reducing obesity; increasing physical activity and decreasing alcohol intake. Not only will these steps reduce cancer but other chronic diseases as well, so the future is really in people’s hands,” he said.