Brittany Ferries asked if it can repatriate Irish lorry drivers 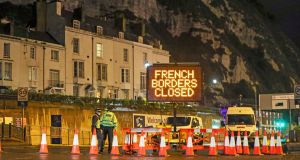 Police and port staff turn away vehicles from the Port of Dover in Kent. Photograph: Steve Parsons/ PA Wire

Irish and French government officials have had contact with Brittany Ferries about running a ferry from France to repatriate Irish lorry drivers stranded in Europe by France’s Covid travel ban on Britain should the need arise.

The French shipping line is understood to have been asked by the French transport minister, Jean-Baptiste Djebbari, to examine whether it could provide capacity for a sailing to Ireland should it be required to accommodate Irish hauliers affected by the ban on travel to and from Britain.

There have been discussions between Irish and French government officials and with ferry companies to see if additional ships could be redirected in the wake of the ban introduced on Sunday night to prevent the spread of a new infectious coronavirus strain from Britain.

Government officials are assessing whether the additional capacity being provided by Stena Line running a second ferry on the Rosslare-Cherbourg route will meet the required demand.

There will be two Stena ferries leaving for Cherbourg on Tuesday following the announcement.

The European shipping line, the largest ferry operator serving Ireland, said on Monday it was bringing forward post-Brexit plans to double capacity on the route to meet demand for customers seeking an alternative to the landbridge route through Britain shut down by the French ban.

The Government was also working to return 200-250 lorry drivers who were en route to mainland Europe and stranded in Britain when the ban was announced.

“We are hoping to find a solution and whatever we can do to assist those drivers to get them out of that logjam in the ports in the UK,” said Minister of State at the Department of Transport Hildegarde Naughton.

Haulage industry groups have expressed concern that the cancellation of ferries and trains may result in Irish lorry drivers being stranded in France.

“The fear is that our drivers will get caught on the French side because boats are late going out today and the drivers may not be able to get back in time before Christmas,” said Eugene Drennan, president of the Irish Road Haulage Association (IRHA).

Minister for Transport Eamon Ryan and his French counterpart, Mr Djebbari, spoke on Monday night about arrangements to help repatriate Irish hauliers stranded in Britain and mainland Europe, and the possibility of safely reopening Irish freight transport into Europe through Britain.

“I have eight truckloads this morning in three factories to the value of €1 million with no bookings,” said the Wexford TD, a former president of the IRHA who runs a haulage business.