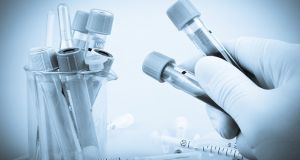 Doctors from the Department of Health and other authorities were before the Joint Oireachtas Committee on Health to discuss the concerns of a parents’ group about the safety of the Gardasil vaccine. Photograph: Getty Images

Teenage boys as well as girls should be given the vaccine that prevents a virus that causes 70 per cent of cervical cancers, a senior health policy adviser to the Government has said.

Doctors from the Department of Health, the National Immunisation Office and the health products regulator were before the Joint Oireachtas Committee on Health to discuss the concerns of a parents’ group about the safety of the Gardasil vaccine.

The committee heard from the Regret group, founded by parents concerned about symptoms suffered by their daughters and which they claim are linked to the vaccine. The group represents 130 girls.

Regret stands for Reactions and Effects of Gardasil Resulting in Extreme Trauma.

Anna Cannon from the group told the committee parents were not given the full patient information leaflet as part of the pack sent out with consent forms. She said her own daughter had experienced severe headaches, hot flushes, balance issues, dizzy spells, clotted nosebleeds and other symptoms following the vaccination.

Dr Colette Bonner, deputy chief medical officer of the Department of Health told the committee the vaccine against human papilloma virus (HPV) was introduced because it protects against types 16 and 18 of the virus, which are known to cause cervical cancers.

There are about 300 cases of cervical cancer diagnosed in Ireland each year and 60 per cent are in women under 50. Annually, about 100 women die from the disease.

Dr Bonner said the vaccine could save up to 70 per cent of those women’s lives.

A national immunisation programme was rolled out in 2010 for teenage girls in first and second year at secondary school.

More than 170,000 girls in Ireland and up to 63 million worldwide have received the “important cancer-preventing vaccine”, Dr Bonner said.

A recent review by the European Medicines Agency confirmed that the evidence did not support a causal link between the vaccine and either of two particular chronic conditions. Two reported conditions that had recently been examined by the European agency were complex regional pain syndrome (CRPS), a chronic pain syndrome affecting the limbs, and postural orthostatic tachycardia syndrome (Pots), a condition causing symptoms such as dizziness and fainting, as well as headache, chest pain and weakness.

“It should be noted that these two syndromes are recognised to occur in the general population, including adolescents, regardless of whether they have had HPV vaccine,” Dr Bonner said.

Dr Kevin Connolly, chairman of the National Immunisation Advisory Committee, which advises the chief medical officer on immunisation-related policy decisions, said he would also recommend that boys get the vaccine.

“Boys are instrumental in passing the disease and the same percentage of boys get infected with the virus as girls, so they can pass on the virus to susceptible girls and vice-versa. So for equity’s sake, boys should also be offered the vaccine at age 12-13.”

Dr Connolly said up to 80 per cent of men and women would have contracted the HPV virus – the most commonly transmitted sexual disease – by the age of 50.

The lifetime incidence of people getting cancer from the virus was “about one in 30, which is very appreciable”. As far as he was concerned, there was “unequivocal” evidence that the vaccine prevented cancer.

Dr Connolly said the authorities were aware of the need to react better to children who had the types of painful conditions which had been examined by the European agency.

“I’m not saying we are the best at doing it,” he said. He hoped some changes could be made in the coming months and years to make support services better.

Earlier this week the High Court refused an injunction seeking the withdrawal of the HPV vaccine. Fiona Kirby, a nurse from Kilbeggan, Co Westmeath, had sought an order requiring the Health Products Regulatory Authority to withdraw the Gardasil HPV vaccine. She claims her daughter suffered “horrendous” adverse consequences after being given it.

While Mr Justice Tony O’Connor accepted a submission from the authority only the European Commission can make a decision to withdraw. The commission is due to make a final decision next year, the court heard.