Breast cancer breakthrough may reduce use of chemotherapy 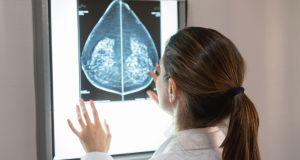 About 3,000 breast cancer cases are detected in Ireland each year, of which about 70 per cent are at the early stage. Photograph: iStock

New research indicates the great majority of postmenopausal women with one of the most common forms of early-stage breast cancer can be spared unnecessary chemotherapy and receive only hormone therapy.

The research was presented at an international cancer conference in San Antonio, Texas, on Thursday. Ireland was one of nine countries that participated in the trial, by providing 150 patients through Cancer Trials Ireland.

Explaining its significance, lead researcher Dr Kevin Kalinsky, director of the Glenn Family Breast Center at Emory University in Georgia, said: “Every day in clinics around the world, physicians wrestle with the question of how to best treat women with this common form of breast cancer.”

“These results are practice changing and demonstrate that the great majority of postmenopausal women can be spared unnecessary chemotherapy and receive only hormone therapy,” he added. “This should bring more clarity to physicians and some relief for patients.”

Prof Cathy Kelly, an oncologist based in the Mater hospital, Dublin, was the principal investigator in Ireland for this study.

Node-negative means it has not spread to the lymph nodes, which are part of the immune system. Breast cancers that have oestrogen hormone receptors are called ER-positive, while the absence of high levels of a growth-promoting protein in the tumour is denoted HER2-negative.

About 3,000 breast cancer cases are detected in Ireland each year, of which about 70 per cent are at the early stage.

The prognosis for women with node-positive breast cancer is worse than for women whose cancer has not spread to lymph nodes, because of greater ability to develop secondaries – where cancer starts in one place in the body and spreads elsewhere.

Avoiding chemotherapy has a massive impact on women’s lives. They are not subjected to the negative effects of chemotherapy such as hair loss, nausea and, in the case of younger women, premature onset of menopausal symptoms. They are also less vulnerable to infection – a risk heightened during the Covid-19 pandemic. Moreover, negative impacts on work and family life, especially for women with young children, are minimised.

In 2011 Ireland was one of the first countries in the world to offer Oncotype DX DNA test for node-negative early stage breast cancer patients, and as a result has one of the longest track records in the world when it comes to clinical data on its effectiveness.

Up to 2011 oncologists had limited tools available to them to determine what treatment a patient needed. Most were prescribed a combination of treatments such as hormone treatment combined with chemotherapy, with treatment decisions based on the size of the tumour and the patient’s age.

DNA testing has given oncologists much more detailed data to assist them when they are considering how to treat the disease. The Oncotype test, made by Exact Sciences, provides two pieces of critical information: likely recurrence of breast cancer and potential benefit of chemotherapy.

In broad terms a woman with a low recurrence score is likely to get no benefit from chemotherapy. With more than a million patients tested in more than 90 countries, it has redefined personalised medicine by making genomics a critical part of cancer diagnosis and treatment.

Tissue samples are sent to the US for analysis for 21 genetic markers that indicate if the disease could grow again or spread. Results are usually returned within days.

In April the HSE’s National Cancer Control Programme agreed to reimburse this test for women with early stage node-positive cancer (where it has spread to between one to three nodes) following a trial period of five months.