Abortion proposals are a ‘sick joke’ and ‘abusive’ - psychiatrist

Requirement for six consultants in suicidal case are 'completely unworkable 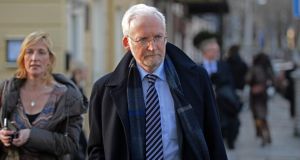 Assembling six doctors to assess a pregnant woman’s request for abortion was a “sick joke” and would be “abusive”, a perinatal psychiatrist, who deals with the mental health of pregnant women has said.

Reports suggesting a new law on abortion could require two obstetricians and four psychiatrists, one of whom must be a perinatal psychiatrist, to assess the suicidal risk of pregnant women was “completely unworkable”, said Dr Anthony McCarthy of Holles Street maternity hospital. Assembling such a group, especially since there were only three perinatal psychiatrists in the State who are all based in Dublin, in a short time would not “completely impractical”.

“[IT] can only have been designed or thought of by people who do not understand how doctors work,” he told RTÉ Radio 1’s Morning Ireland.

The implication of assembling such a group was that the pregnant woman was not to be believed and this would discourage women who were distressed or suicidal from coming forward to talk, he added. “The idea that you would bring her through a forum such as this. almost an inquisition, where she would have to tell her story in front of six different people is frankly abusive,” he said.

“This would do everything to say ‘don’t talk’,” he added. If a young girl was being being cyber-bullied the message would be to come forward and compassionate care would be available. “But if she’s pregnant well somehow now the implication is ‘I don’t believe you, you may be manipulative, now you may be lying I’m going to bring you in front of six people to tell your story’,” he said.

It showed nothing had been learned after the scandals in Ireland involving people abused in institutions and in the Magdalene Laundries. “I think we have learned nothing if this is a serious suggestion,” Dr McCarthy said.

Women in such a distressed state may not even want to tell their story to two psychiatrists let alone six. They may even have to go through an appeals panel. “My first question to any woman in that situation would be ‘why are you putting yourself through that process we are obviously putting so many hoops in the way of you that either we don’t believe you or we’re going to sabotage you anyway’,” he said.

He said he had seen women who had tried to kill themselves during pregnancy, who had taken overdoses or stabbed themselves. They should be encouraged to seek help and be heard and not put off that they were not going to be believed, he said. Sometimes by talking about it women will see another way. “But if we put through a process whereby someone cannot be listened to or if they are going to see this inquisition in front of them they are going to come no where near us,” he said.

1 Shane Ross: ‘I lost a friendship with Mattie McGrath completely. He got totally personal’
2 Murder in a crowded house: The full story of the Patricia O’Connor trial
3 Coronavirus: Aer Lingus cabin crew in self-isolation after passenger’s positive test
4 Areas advised to ‘stop everything’ as Storm Jorge hits Ireland
5 ‘Nobody cares’: Children freeze to death as Syrians flee onslaught in Idlib
Real news has value SUBSCRIBE