Abortion ‘is never, ever a casual decision’

‘I thought the days of assassinating abortion providers were over,’ says Dr Shelley Sella, one of four remaining doctors in the US willing to terminate third-trimester pregnancies 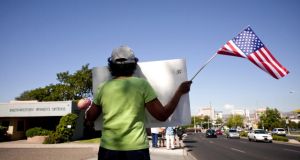 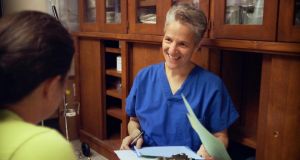 Although Dr Shelley Sella lives under the threat of death, she doesn’t consider herself brave and doesn’t fear for her safety. The courageous ones, she says, are the patients for whom she performs abortions, sometimes in the third trimester of pregnancy.

“It’s agonising what they go through. Every week they tell us their stories because we have the time to listen,” she says. “We have to respect women and trust they are capable of making these difficult decisions.”

Since the murder in Kansas of the abortion advocate Dr George Tiller, in 2009, four doctors in the US remain who conduct third-trimester abortions. These procedures account for less than 1 per cent of abortions in the US and less than 2 per cent in the UK.

Sella, who worked with Tiller, is one of the four. Southwestern Women’s Options, the clinic she works at in Albuquerque, New Mexico, is constantly surrounded by the hum of anti-abortion protesters, people she regards as terrorists.

“I didn’t think it would happen,” she says of Tiller’s murder. “I thought the days of assassinating abortion providers were over.” Sella, who has a 17-year-old son, lives with her wife in California on the alternate weeks when she is not in Albuquerque. Retreating to her California home is what makes her intense work manageable, she says.

With the campaign against her clinic heating up in recent weeks, her greatest fear is that the women she cares for would either be denied abortions or be too afraid to seek them out in the “climate of fear” created by anti-abortionists, she says. Individual states are adding further restrictions to abortion by the week, and only 15 continue to provide them under Medicaid.

A new US film in which Sella appears, After Tiller, explores the ethical and emotional challenges that women and doctors face.

Sella insists on using the term baby, rather than foetus, and doesn’t shy away from the tragedy of the situations she faces. She says it is desperation and a desire to do what is best for their babies that drives mothers to seek third-trimester abortions (which are defined as taking place at 25 weeks’ gestation and onwards in Albuquerque, and 24 weeks’ gestation in Britain).

The women Sella treats fall into two categories: those who discover foetal abnormalities; and those with healthy, viable babies whose maternal circumstances mean they could not cope with the baby. In 15 per cent of cases Sella’s clinic turns women down.

“Ever since the diagnosis of a foetal abnormality in a very wanted child, these women have been living in a special kind of hell,” says Sella. As abortion is “in the closet”, many women have not been informed of this choice by their doctors and have searched the internet for help in a “climate of fear” created by anti-abortion campaigners, she says.

The documentary film, directed by Martha Shane and Lana Wilson, shows the hands of heavily pregnant women, held protectively over their baby bumps, as they weep and share their stories. In the cases of congenital abnormality, the parents want to spare their babies the pain of intrusive medical procedures. They cannot face the prospect of seeing their baby slowly die over weeks or months, says Sella, and sometimes feel they cannot trust hospitals to respect their instructions for no resuscitation.

But have these parents been shown the other picture: giving birth full term and at least having the fulfilment of holding and loving their living baby until it dies? “Before they come to us they already know all the options, although we also counsel them fully. A foetal hospice organisation, ARC, is there to support parents who choose to go full term,” Sella says.

The abortion procedure after 25 weeks is an agonising four-day trial. The baby is first euthanised with an injection of a drug, through the mother’s abdomen, that gradually stops the heart. Whether the baby experiences pain is unknown, although the sedation given to the mother passes through the placenta, likely sedating the baby as well, Sella says. The cervix is then softened with a seaweed-based pessary, then birth is induced with a drip. The labour itself is as arduous as with a live baby.

These babies are usually given names. The parents (Sella describes them as such) usually want to see and hold their stillborns afterwards.

Sella and her colleagues help the couples or individuals in a ceremony after the birth, if they wish it, and give them memory boxes containing keepsakes: foot- and handprints, photographs, the blanket in which the baby was wrapped.

They go away with the reassurance that by having a safe vaginal birth, rather than a Caesarean during a high-risk labour, they have a good chance of healthy babies in the future, Sella says.

The reaction is different for people who have chosen abortions for social reasons. “Total joy – a more overwhelming sense of relief,” says Sella. “They come to us faces down, depressed and sad, and at the end of the week we see their radiant smiles – an amazing transformation.”

“A woman who has escaped domestic violence and got on a bus to travel more than 1,000km by herself, telling no one, and is so desperate that she has managed to come to us is a phenomenally courageous woman,” says Sella.

“This is never, ever a casual decision – that’s the stereotype. Women who realise they are pregnant at six weeks don’t think, I’ll wait until 25 weeks and then travel thousands of miles to find an abortion clinic. That never, ever happens.”

In the past few weeks Sella has cared for a nine-year-old impregnated by rape. Because she had never had a period, and because the rapist threatened to hurt her if she said anything, the pregnancy went unnoticed.

In another recent case, a teenager pregnant by rape and too traumatised to tell anyone was brought in by her mother, who was highly religious and anti-abortion – but not in the case of her daughter. “The mother feared coming home to find her daughter hanging dead in the closet,” says Sella.

A mother of three came to the clinic because, at 26 weeks, her husband was killed in a car crash, destroying her family emotionally and financially, so she felt she could not cope with a new baby. “Unless you have listened to the woman and know what she’s going through, it is hard to understand,” Sella says.

In the film, an ambivalent 16-year-old whose parents, boyfriend and boyfriends’ parents all want her to have her healthy, viable baby feels damned whether she has the baby or not. She chooses abortion.

Many would say this is clearly a case for adoption, but Sella argues that “coerced adoption” causes lifelong trauma and psychological problems. She says some women fear that their babies, if adopted, would feel abandoned, or be abused, or would learn eventually that their mother was a drug addict or their father a rapist, for example.

“The most difficult ethical situations I face are when a woman believes deeply that she needs an abortion and I don’t think we can care for her. I want to help but can’t safely do that. Abortion providers wrestle with difficult situations, whereas” people who are anti-abortion “are stuck in a black-and-white view. We are in the messy reality of people’s lives.”

After Tiller is showing next Saturday as part of the IFI Stranger Than Fiction festival; ifi.ie/stf