Government to enact X case legislation by the end of July 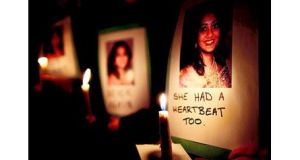 The Government's decision to legislate for abortion came after the death of Savita Halappanavar.

New laws on abortion legislating for the X case will be in place by the end of July, the Council of Europe has been told by the Government.

The Government has informed the Strasbourg-based Council of Europe of its plans, which will see the legislation published next month.

The council’s Committee of Ministers confirmed it had received a timetable from the Government.

“The Deputies recalled that the committee highlighted the legal obligation on Ireland to put in place and implement a legislative or regulatory regime providing effective and accessible procedures whereby pregnant women can establish whether or not they are entitled to a lawful abortion, and that only the implementation of a statutory framework would provide a defence for medical doctors from criminal prosecution,” it said in a statement.

The statement added that it had “noted with satisfaction” the Government’s decision to introduce legislation and regulations.

The heads of bill will be published in April, and the legislation itself will be enacted before the end of the Dáil term in the summer, the Government stated in a communique to the 47-member council.

The council’s Committee of Ministers is responsible for ensuring judgments from the European Court of Human Rights (ECHR) are carried out.

The ECHR’s ruling on the so-called ABC case found the state violated the rights of a woman in remission from cancer who was forced to travel abroad to terminate her pregnancy.

The Government announced plans for the legislation in December following recommendations in an expert group report published the month before on how to respond to the ABC ruling.

It also committed to enacting the legislation in accordance with the 20-year-old Supreme Court ruling on the X case, which allows for abortion when a woman’s life is in danger — including the threat of suicide.

She died at Galway University Hospital on October 28th after contracting septicaemia. Her husband Praveen Halappanavar said she had been denied an abortion.