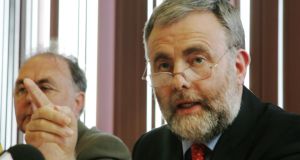 SIPTU President Jack O Connor said savings can be made by increased tax on wealthy and through savings from the promissory notes deal. Photograph: Cyril Byrne

The Government is seeking to open a second round of talks with unions despite warning the public sector unions that it would enforce pay cuts.

It has asked the Labour Relations Commission to consult with trade unions to see if there is a basis for a deal on making planned savings on public service pay.

Minister for Public Expenditure and Reform Brendan Howlin said the commission had been asked to report back as soon as possible.

He has asked Kieran Mulvey, chief executive of the Labour Relations Commission, to contact union leaders to see if they are willing to reopen negotiations on cost-cutting.

A decision was taken at cabinet to try and start a second round of negotiations on the pay deal.

“The Government further agreed to request the CEO of the Labour Relations Commission to make contact with the parties in the coming days to establish whether or not there is a basis for a negotiated agreement to meet these budgetary targets,” the Department of Public Expenditure and Reform said in a statement.

In response the No2CrokePark2 campaign group called on union leaders not to take up the offer of talks.

Spokesperson Eddie Conlon said: “Entering talks would be a betrayal of all those who voted no and said very clearly that they have had enough of austerity and cuts. ”

Last week, the INTO said it would ballot its members for strike action in case the Government pushed through with the threats to make unilateral cuts to pay and changes to working regimes following the rejection of Croke Park II.

The Government has also reaffirmed its requirement for €300 million of pay and pension bill savings in 2013 and €1 billion by 2015.

Earlier, Siptu proposed a higher rate of tax on those earning over €100,000 as part of an alternative approach to achieving the savings contained within Croke Park II.

Siptu president Jack O’Connor said the Government could also choose to factor in savings from the promissory notes agreement to alleviate the level of cuts required in 2014.

Mr O’Connor outlined his ideas in the latest edition of the Liberty newspaper, which is produced for the union’s 62,000 members.

Speaking to RTÉ’s Morning Ireland Mr O’Connor said there were a num ber of alternative methods to finding savings following the rejection of Croke Park II was rejected by unions.

He said there was a common belief, especially among public sector workers, that lower-paid workers had been forced to bare the lion’s share of the debt burden, while higher-income workers had not been hit as hard.

Mr O’Connor said he did not believe a new tax on incomes above €100,000 posed a risk to international businesses in Ireland.

“The simple fact is that we are arguing over money the country doesn’t have. We are still borrowing over €1 billion a month and the savings from the promissory notes deal have no bearing on this,” he said.

“Increasing taxes will not stimulate the economy but rather further damage consumer confidence which remains one of the biggest problems facing this country.

“Government and unions must work together to deliver a sustainable cost base that assures front line services and the jobs and positions of all public servants.”

General secretary of the Civil, Public and Services Union Eoin Ronayne said now is not the time to knock any ideas.

“We have a conference this week and will certainly discuss Jack’s recommendations. It’s a welcome development,” he said.

Croke Park II aimed to cut the public service pay bill by €300 million this and would have involved sliding pay cuts for those earning above €65,000 a year, with working hours increasing across the public service.

Overtime rates would have been cut and linked to an employee’s wage.