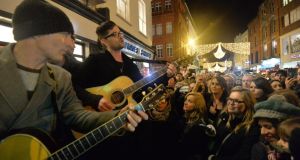 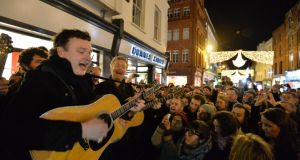 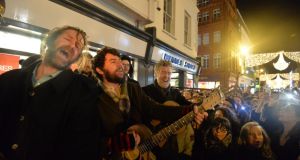 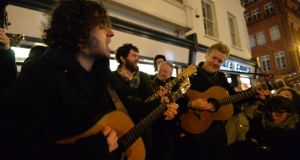 In what has almost become a Christmas Eve tradition, singer Glen Hansard led a rabble of musicians in song to a crowd of hundreds on Dublin’s Grafton Street.

Damien Rice, Mundy, Paddy Casey, Liam O’Maonlai, Declan O’Rourke, Danny O’Reilly from the Coronas and Danny O’Donoghue from the Script were among the musicians busking for fans full of Christmas cheer. As the shops wound down for Christmas the large crowd thronging the area brought Dublin’s most famous pedestrian shopping street to a standstill.

“If you’ve got 50 pence, a pound, whatever you’ve got,” Glen Hansard told the crowd as he waved a red Santa hat, reminding the crowd that this was all for a good cause, The Simon Community.

The crowd joined in singing along to some classic Irish songs like ’The Auld Triangle’, ‘On Raglan Road’ and Phil Lynott’s ‘Sarah’ as well as the Beatles’ ‘Get Back’ and the Jungle Book’s ‘Walk like You’. Mundy sang his unseasonal song ‘July’, Damien Rice belted out the Blower’s Daughter and Declan O’Rourke sang Galileo.

But the question on many tweeter’s thumbs was “where’s Bono?”. “Waiting for Bono/Godot on Grafton Street” tweeted one onlooker. The U2 singer had joined the sing-song in previous years but broke his arm during a bike ride in New York’s Central Park last month.