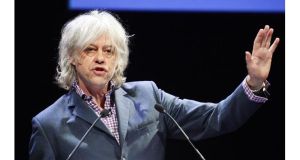 Geldof is reuniting with Pete Briquette, Simon Crowe, and Garry Roberts to play the Isle of Wight on in June with the band due to appear at the Live in the Marquee three weeks later on July 5th. Photograph: Alan Betson/The Irish Times

The treatment of women in the Magdalene Laundries was a reflection of the brutalisation of Irish society which had been tolerated for decades and is something about which Irish people should be "rightly ashamed," singer Bob Geldof has said.

Geldof said the letters on the controversy published in The Irish Times were "eloquent and dignified" but said there should be no surprise about what was happening in the laundries as he believed it was well known throughout Irish society.

"The Taoiseach, Enda Kenny has apologised - but what has he to apologise for - it was our families, our parents who allowed children go into those laundries knowing full well what awaited them in there at the hands of the nuns," he said.

"And the laundries are just another manifestation of the brutalisation of Irish society where kids were beaten and abused by Christian Brothers - it was dreadful, dreadful, dreadful but we all knew it was happening and what did we do?," he asked.

Geldof was speaking in Cork in advance of his band, The Boomtown Rats playing the Live in the Marquee on Leeside this summer - just weeks after they re-unite to play at the Isle of Wight and some 27 years after they played their final gig together in Dublin in May 1986.

"It’s over 30 years since the Rats formed but I would defy anyone to go through Banana Republic, Rat Trap or Looking After No 1, line by line and tell me that what we were singing about is still not pertinent and relevant today," he said.

Geldof is reuniting with Pete Briquette (bass), Simon Crowe (drums), and Garry Roberts (guitar) to play the Isle of Wight on June 16th with the band due to appear at the Live in the Marquee three weeks later on July 5th.

"Yeah, I suppose you could say the Isle of Wight is a rehearsal for Cork," quipped Geldof who pointed out that he had strong links to Leeside as it was where his father met his mother and where his sisters were born.

The Boomtown Rats play Live in the Marquee on July 5 with tickets for the concert going on sale tomorrow morning. Among the other acts lined up for this year’s series are ZZ Top, Elton John, Sting, The Wanted, Olly Murs, Elvis Costello and Christy Moore.