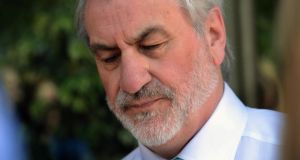 
The two associations representing rank-and-file gardaí, and sergeants and inspectors are to recommend to members that they should accept new proposals aimed at cutting the public service pay bill which were agreed in principle at the Labour Relations Commission (LRC).

The Garda Representative Association and the Association of Garda Sergeants and Inspectors both said the terms delivered the savings required by the State without their members incurring any reduction in pay and allowances.

The agreement involves members of the force working an additional 30 hours per year, the equivalent of three shifts, for no remuneration.

Chief executive of the LRC Kieran Mulvey said yesterday that 10 unions opposed to the original Croke Park II agreement last week were now “potentially looking at it afresh in a more positive disposition towards agreeing to the details that have been negotiated with them during the week”.


‘Contingency’ legislation
Separately the Government indicated it would continue to prepare legislation to give effect to the savings to the pay bill it is seeking “as a contingency”. It said its preference was for an overall deal with all trade unions representing staff across the public service. However it was prepared to enter into deals with individual unions if this was not possible.

Mr Mulvey said Friday was the deadline for the end of the current LRC process and there would be no deviation from the Government’s timetable of implementing the savings in July.

The LRC may engage with teaching unions – possibly over the weekend or early next week – after the conclusion of their ballots on industrial action.

Other unions such as Unite, the Psychiatric Nurses’ Association and the Irish Federation of University Teachers have not reached any new agreements at the LRC. The Republic’s largest union, Siptu, continued in talks at the commission yesterday.


Industrial cost
Mr Mulvey said the country could not afford industrial strife, which would be like “shooting ourselves in the head”.

The Irish Medical Organisation, which is to ballot members in early June, said while there was no agreement with the Government on many of the critical issues facing doctors, progress had been made in the talks.

The IMO said that Government had accepted its argument that significant savings in the payroll budget could be generated by transferring certain tasks such as phlebotomy from non-consultant hospital doctors to nurses.

The IMO said it had also reached agreement that the Government would enter into discussions with it “to examine the issue of retention and career paths for doctors within the Irish health system and, in particular, the recruitment and retention of consultants”.


‘Emboldened’ Government
“On the broader issue of pay, the IMO argued strongly to remove the threat of pay cuts for our members earning over €65,000, not least because of the very substantial cuts which our members have already endured. The silence of other unions on this issue has clearly emboldened the Government to legislate if necessary to impose these cuts and, in that context, we do not expect to reach agreement on this issue.”

5:26 'She let her guard down and got sick', Texas hospital battles coronavirus surge

1:33 'We were just another toy', Epstein accusers speak about Ghislaine Maxwell

1:33 'We were just another toy', Epstein accusers speak about Ghislaine Maxwell

Ryan says Government considering targeted Covid-19 testing at airports 12:30
Japan floods kill over 50 as further heavy rain forecast 12:17
Covid-19: Melbourne returns to lockdown after a spike in cases 12:16
Cam Newton broke the mould: Can his flame be rekindled at the Patriots? 12:12
Federal Reserve official warns US recovery may be ‘levelling off’ 11:47