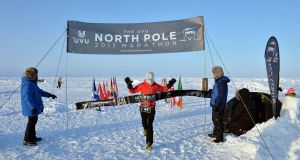 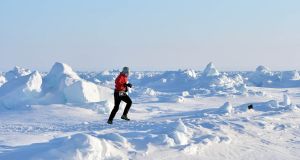 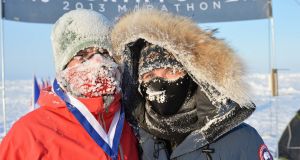 A Galway-based runner has won a marathon at the North Pole.

Gary Thornton (33), a national school teacher who runs with the Galway City Harriers, beat 50 other international competitors to win the race on Tuesday.

He faced brutal conditions of minus 30 degrees though luckily no wind chill factor.

The race took place at Camp Barneo, an annual Russian military camp, which is close to the geographical North Pole at 90 degrees north. Mr Thornton said the North Pole was “like a different planet”.

He completed the marathon in 3 hours 49 minutes and 29 seconds, well outside his marathon best of 2 hours 17 minutes during a qualifier race in Rotterdam last April for the London Olympics.

He completed it after only four days of cold weather training on the Norwegian island of Spitsbergen in the high north.

Thornton said the conditions were frequently treacherous with energy sapping hills and pressure ridges from the sea moving and he had to wear a face mask and special gear.

“This is so far from a city marathon. It's quite refreshing to be doing something that is a lifetime experience, but it was energy sapping. You'll never do it again. It was a really enjoyable and a worthwhile experience,” he said.

The 33-year-old’s teacher wife Elaine Barrett (30), joined him on the floating Arctic ice after two days earlier deciding to take part in a half marathon on the same 4.69km course.

“She might normally run 20 minutes once a week so this was a bit last minute. And she wouldn’t be a woman who likes the cold, she likes being beside the stove,” Mr Thornton said.

The camp is set up by Russian paratroopers dropped on to the ice who also guard the route with rifles for fear of polar bear attacks.

Richard Donovan, North Pole Marathon organiser and the first man to complete the adventure 11 years ago, said Mr Thornton’s training regime on the west coast of Ireland stood him in good stead. “Coming from the west of Ireland means you are kind of used to robust weather conditions,” he said. “I know this is extreme but you go out running in the west of Ireland, wet and near constant windy conditions, it’s going to toughen you up.”

Mr Thornton explained the impact the Arctic conditions have on the body. “On the last lap I could only really see partially out of my right eye and fully out of the left. I had to keep using my frozen mitten to break ice off the face mask,” he said.

Mr Donovan said this year’s conditions were the most difficult to date. “It’s unpredictable from one year to the next what the course might be like,” he said. “We had some solid ice but then we had competitors running over what I call ice hillocks, pressure ridges from the sea moving, but as the race went on the soft sections became worse. This is energy-sapping soft snow.”

The fastest woman on the course was Briton Fiona Oakes, a 2:38 marathon runner in normal conditions who took close to five hours to complete the race.