Finding a new place for women in our 'fantasy' Constitution 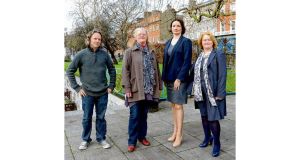 Back in the mid 1970s the Waterford singer-songwriter Gilbert O’Sullivan was at the centre of a debate on the BBC radio programme Woman’s Hour about the release of his controversial pop song A Woman’s Place (Is in the Home). However provocative the lyrics, O’Sullivan could, in his defence, have said he was merely reflecting the definition of women enshrined in the Irish Constitution, a clause that will be scrutinised today by the Convention on the Constitution.

Article 41.2 of the 1937 Constitution refers specifically to the role of women in Irish life. The article reads: “1. In particular the State recognises that by her life within the home, woman gives to the State a support without which the common good cannot be achieved. 2. The State shall, therefore, endeavour to ensure that mothers shall not be obliged by economic necessity to engage in labour to the neglect of their duties in the home.”

The convention’s 100 delegates, made up of politicians and 66 citizens, are meeting this weekend at the Grand Hotel in Malahide, Co Dublin, and will also consider measures to increase women’s participation in politics and public life.

Even when it was drafted the article caused controversy. The historian Diarmaid Ferriter has pointed out that it came in for criticism from organisations including the Six Point Group, in London, which said: “These clauses are based on a fascist and slave conception of woman as being a non-adult person who is very weak and whose place is in the home.”

So far the convention has received a small number of submissions on the issue, including a lengthy one by the National Women’s Council of Ireland, which will make a presentation today. Orla O’Connor, the director of NWCI, says the clause is “completely outdated” and never accurately described the diverse experiences of women in Ireland. “It needs to be replaced with a gender-neutral article.”

Others support the removal of the article altogether, including Dr Anne Rossiter, an Irish woman living in England. “No woman had a hand in drafting the 1937 Constitution. We are now in the 21st century. It is time to move on.”

For Lily O’Donoghue, a 66-year-old who raised seven children on the west Clare farm she owned with her husband, the “fairytale” clause in the Constitution that suggests women who stayed in their proper place in the home would “be minded and looked after” did not reflect the reality of life for a woman who was the primary care-giver.

In addition to her farm work and child- rearing, O’Donoghue spent years caring for her mother, who had Alzheimer’s disease. It was only after her mother died and O’Donoghue became involved in community work that she reflected on the isolation and economic discrimination women experienced.

“I discovered later on that I was not entitled to tax credits despite owning half the farm and working on it all those years. I wasn’t entitled to credits as a carer for my mother, either, because I hadn’t left a job to care for my mother . . . In my view the clause was about keeping women dependent, with no money, setting them up in the poverty trap. It was somebody’s idea of what women should be like, a kind of comely-maidens-dancing-at-the-crossroads fantasy, but it wasn’t in touch with reality.”

Despite her personal circumstances leading to missed opportunities for further education and employment, when her mother died, 12 years ago, O’Donoghue went on to work with carers herself, retiring last year.

The clause makes Maura Butler, a 55-year-old former criminal lawyer from Co Roscommon, “really cross”. She describes it as an affront to women’s dignity. “It’s contrary to all human-rights principles to define people according to their gender and to then proceed to refer to women as mothers, ignoring those who choose not to be mothers, not to mention fathers. And then to use that awful word “neglect”, which seems designed to evoke guilt in those women who choose to work outside of the home.”

A mother of two sons and a lone parent, Butler went into professional legal training because it allowed her to spend more time with her children. She does not, as some do, believe the clause was drafted as a tribute to the domestic contribution of women. “It was crafted from some kind of medieval, patriarchal space . . . It makes women less when it comes to property rights and decision-making.” She also believes the constitutional assertion that a woman’s place is in the home has been a barrier to the State “sorting out the childcare issue”.

Linda Brennan, a 42-year-old from Co Kerry who’s a senior manager in a software multinational in Dublin, found out about the clause only recently. “My first reaction was to laugh. It’s hilarious,” says the mother of two small boys. “In my job everything has to be exact, with proper procedures. Some of the procedures in this document are rubbish. On the one hand our Constitution says women should be at home doing their duties, and then there are State schemes aimed at lone parents encouraging them back to work, which totally contradict this.”

As part of a women’s support network established in her workplace, Brennan set up a parenting group that, she says, is attended by almost as many men as women. “Men are involved in home life and in all sorts of informal care; it’s not just a woman’s responsibility, but that’s what the Constitution implies.”

Gabhann Dunne, a 38-year-old artist and father from Kildare, is one of thousands of Irish men now providing the bulk of childcare and domestic work at home. His wife has a demanding job outside the home, and he is responsible for childcare, washing, cleaning, cooking and the general running of the house. He discovered article 41.2 of the Constitution as a teenager and was amazed. “I was just shocked that people would be so naive to put that kind of thing into a legal document.”

Changing the script: The offending article

* Article 41.2 of the Constitution reads:

1 In particular the State recognises that by her life within the home, woman gives to the State a support without which the common good cannot be achieved.

2 The State shall, therefore, endeavour to ensure that mothers shall not be obliged by economic necessity to engage in labour to the neglect of their duties in the home.

* The National Women’s Council proposes it be changed to:

The State recognises that home, family and community life give society a support without which the common good cannot be achieved. The State shall endeavour to support persons caring for others.