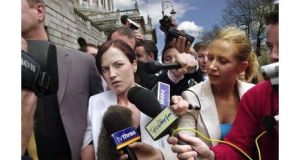 Cranberries singer Dolores O?Riordan leaves the High Court yesterday, at the end of the case taken by Ms Joy Fahy, her former nanny.

A former nanny employed by Cranberries' singer Dolores O'Riordan-Burton and her husband, Mr Don Burton, could face a legal bill of more than €300,000 after losing her High Court action against the couple on all main grounds.

Ms Joy Fahy had alleged breach of contract, negligence and breach of duty and, in the case of Mr Burton only, false imprisonment. She lost all of those claims. She won an award of just €1,500 because of the condition of some of her personal belongings, including clothing, when returned to her.

While a decision on costs will not be made by Mr Justice Quirke until tomorrow, Ms Fahy could now face a very substantial bill, as lawyers for the Burtons submitted yesterday that they should be entitled to costs on the High Court scale. If the judge allows High Court costs, these could amount to €300,000, legal sources speculated.

The action had been before the High Court for nine days and the award of €1,500 could have been achieved in a lower court, where costs are lower.

In his reserved judgment, Mr Justice Quirke found in favour of the Burtons on most issues. His decision awarding €1,500 in respect of her personal belongings, some of which Ms Fahy had complained were returned to her damaged and dirty, came only at the end of his ruling.

Ms Fahy had alleged that she had had a difficult few weeks in Canada working for the Burtons in 1999. She had claimed she barricaded herself in a room because of her concern at what she alleged was Mr Burton's aggressive behaviour. Those claims were strenuously denied by both Burtons, who claimed that Ms Fahy had walked out on them.

Mr Justice Quirke said he was satisfied on the evidence that Dolores O'Riordan-Burton and Mr Don Burton were deeply devoted to their son, Taylor, who was a baby at the time of the alleged incidents regarding Ms Fahy in 1999.

Ms Fahy had sued the defendants under a number of headings, including alleged breach of contract, negligence and breach of duty. She also sued both defendants for alleged false imprisonment but, during the hearing, it was indicated that that claim was not proceeding against Dolores O'Riordan-Burton, but against her husband only.

Mr Justice Quirke said he was satisfied on the evidence that Ms Fahy was a qualified, competent and caring childminder.

The parties had differed in their evidence in respect of many issues, the judge said. It was difficult to reconcile the testimony of Ms Fahy with that of Ms O'Riordan-Burton and her husband and their mothers. But certain facts which had been proved were not in dispute. In 1997, Ms Fahy spent her initial period of employment with the Burtons, soon after Taylor was born. She went with them to Canada, but they parted on good terms when Dolores felt she was not ready to "share" the child. In 1999, when Ms Fahy was working for the wife of U2's Larry Mullen, Ms Ann Acheson, she was contacted by Mr Burton and had agreed to work for him and his wife again.

The defence claimed that, after a couple of days in Canada, Ms Fahy told Eileen O'Riordan that she was going home. The Burtons learned on Canadian Independence Day that she was to leave, and a row broke out between Ms Fahy and Mr Burton.

Referring to the false imprisonment claim against Mr Burton, the judge said it arose on July 1st, 1999 when, Ms Fahy claimed, she was confined to her bedroom in the Buckhorn house and was not free to leave. The onus lay on her to prove that she was falsely imprisoned. She had also claimed she was in fear of Mr Burton. Mr Burton acknowledged that she was in distress but, the judge said, he found it difficult to consider she feared physical violence.

The judge turned down claims that Ms Fahy was to get £500 "clear" per week, to be allowed to keep the jeep on leaving and to be given £10,000 on leaving.

1 Man unidentified in psychiatric hospital for 30 years may have DNA taken
2 Miriam Lord: Another dog’s dinner as D’Arcy jumps on the gravy train
3 The far right rises: Its growth as a political force in Ireland
4 ‘Insane’ gathering of hundreds of students in Galway condemned
5 Covid-19: One death and 363 further cases confirmed in State
Real news has value SUBSCRIBE