Our waterways have become tunnelled with alder and willow, blocking light and reducing bioproductivity, says a reader, who suggests the animals would fell the riparian trees and let in the sun 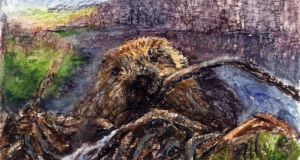 The correspondence prompted by this column over the years has often been richly instructive. And along with the observations that nourish Eye on Nature have sometimes come suggestions for the improvement of this island’s natural world. Among them, most recently, was an argument for the introduction to Ireland of the European beaver, Castor fiber.

From a Tipperary reader, it ran as follows. Before the introduction of rural electricity and bottled gas, country people burned every scrap of timber they could lay hands on, including the trees that lined the banks of streams and rivers. In his youth, as he recalled, the bare-banked rivers teemed with salmon parr. Now they were tunnelled with alder and willow, letting in only a fraction of the light and reducing, he was sure, the rivers’ bioproductivity. What was needed, he suggested, was beavers, to fell the riparian trees and let in the sun. “Think about it,” he urged.

His inspiration came from watching YouTube videos celebrating the reintroduction of beavers to Scotland after an absence of 400 years. Indeed, after the animal’s near extinction in Europe in the late 19th century, there have been formal reintroductions in some 26 countries and many unofficial releases. In Britain, too, at the very western edge of the beaver’s known native range, releases have proliferated.

In the Scottish Beaver Trial, overseen by official and voluntary groups, 11 beavers from Norway were released, unfenced, in a working forest in Argyll in 2009. This followed public consultation, with a mostly favourable response, and the Scottish government will make a final judgment on it next year. Meanwhile, however, unlicensed and unauthorised beavers are living in unknown numbers at more than 40 sites elsewhere in Scotland and at others in Wales and southern England.

Beavers never reached Ireland, so far as archaeology can establish. That could seem surprising, given all the other furry, edible animals – red deer, badger, fox, pine marten, red squirrel – that were most probably brought to Ireland by early settlers. “Unofficial” reintroductions continue today: illegal smuggling may account for at least some of the wild boar now regarded as invasive aliens (however native the animal may have been) and the muntjac deer, which certainly never belonged. The beaver would not tempt the modern hunter to smuggling, but other views of nature – or the local tourist trade – conceivably might.

The undesirability of an alien species depends mostly on its impact on native wildlife and environment. The bank vole and greater white-toothed shrew, for example, both arriving accidentally from the continent, have brought about dramatic displacement of the native woodmouse and pygmy shrew in many parts of the south and west.

Largest rodent
The vegetarian beaver is Europe’s largest rodent; feeding on water plants, herbs and tree bark, it offers little competition to any other species. The environmental changes it engineers, however, can be profound. The trees it fells, with its teeth, along the banks (birch and willow for preference; alder is often left untouched) are not killed, but sprout again in a kind of coppicing. The dams the beaver makes and renews with the branches create pools of calm water for fish, otters, frogs, dragonflies, water birds and bats. The dams slow the flow of floods but can also submerge adjoining land and sometimes give way in a damaging pulse of water and silt.

The UK’s Salmon & Trout Association weighed the ecological benefits of beavers, among them their boost to biodiversity, the enriching of river nutrients and extra protection from floods. The notion that the dams are difficult for salmon and trout to cross was now, it thought, untenable, but it did perhaps need more research.

Are tree-lined Irish rivers really too shady for contented fish? What, then, of the drive by the Native Woodland Scheme, backed by the Forest Service, to create more riparian woodlands? It was not the burning of trees as fuel that stripped the lowland river banks but the brutal arterial drainage schemes of the last century.

There were, indeed, dark tunnels in State conifer forests where trees were planted to the water’s edge, and life often dwindled in the streams. This has now been widely remedied. Summer shade from native broadleaf trees such as willow, birch, oak and alder is altogether more benign, and riparian woodland feeds the water with organic nutrients and insect prey. Rather than having too much, says the Forest Service, most of our lakes and rivers are still far too bare.

European beavers no longer need another sanctuary. From a low of some 1,200 animals in the late 19th century, their populations now top a million. Does Ireland need beavers? We have, perhaps, enough foreign animals to be going on with. And in our slow lowland rivers, beavers might well not bother to build dams at all.

1 Aaron Brady, the man who said with pride he was a cop killer
2 Aaron Brady found guilty of capital murder of Det Garda Adrian Donohoe
3 A chronicle of dignity and despair
4 Kamala Harris targets Trump’s ‘failed government’ in first event with Biden
5 Make a Day of It: Get back into your favourite city centre, Dubs urged
Real news has value SUBSCRIBE