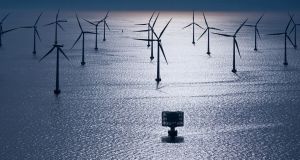 Just 12 decisions on proposed wind turbine constructions were made in 2015 in Ireland, compared with 19 the previous year and 29 in 2013

Long delays in processing planning applications for wind turbines are causing concern in the renewable-energy sector as it emerged that dozens of cases referred to An Bord Pleanála dating to 2013 have yet to be ruled upon.

Documents seen by The Irish Times show almost 40 such applications are working their way through the application process, while just 12 decisions on proposed wind turbine constructions were made in 2015, compared with 19 the previous year and 29 in 2013.

While some of the undecided cases comprise recent submissions that may be processed within the regular time frame, many have been hit with delays caused by requests for additional information from the planning body to satisfy new conditions set down by a High Court ruling on wind farms in December 2014.

The court decided to quash planning permission for the construction of six turbines in Co Cork in the case of O’Grianna v An Bord Pleanála, and held that applications for wind turbines must reference the potential environmental impact of any grid connection.

Previously accepted guidelines stipulated that plans for grid connections could be submitted separate to applications for the physical construction of the turbines, and it is thought that many applications made to An Bord Pleanála before and immediately after the O’Grianna judgment have been delayed as they do not fit the new requirements.

The board denied planning permission for nine wind farm developments during 2015, a figure broadly in line with those of previous years, but just three were granted permission as other potentially viable submissions struggled to adjust to the new requirements, meaning the grant rate so far this year stands at 25 per cent.

This contrasts with an average grant rate of 75 per cent over the four preceding years.

The delays are a blow to not only wind farm developers trying to meet tight deadlines for the Refit 2 scheme of tariff supports for wind energy but also the Government, which is already struggling to meet European Union renewable energy guidelines.

Ireland is currently tasked with generating 40 per cent of its energy requirements through renewable sources by 2020, and may face heavy fines and trade sanctions depending on how far short of this target the country falls.

Latest statistics from the Environmental Protection Agency show Ireland generated 23 per cent of electricity through renewable sources in 2014, with wind farms forming an integral pillar of the country’s green energy infrastructure.

The Irish Wind Energy Association’s head of communications, Brian Dawson, said wind farm applicants were adapting to the new guidelines but said the delays being experienced were of concern.

“Our members have seen delays from the normal planning time scale, and that is a concern which we have raised with An Bord Pleanála directly in terms of their workload and resourcing,” he said.

Anti-wind farm group Protect Rural Ireland has welcomed the delays, however, and said they were partly down to “the fact that communities have woken up” and were more actively opposing applications.

A spokesman for the Department of the Environment said the O’Grianna judgment was likely to have had implications for the progress of wind turbine applications but he would not comment on any potential impact on renewable energy targets.

An Bord Pleanála said the situation would take a number of months to resolve but that it was working through delayed cases expeditiously.

Meanwhile, the department has refused to comment on reports that new regulations for wind farms will not be published in the lifetime of the Government.

The plans are expected to increase the setback distance of wind turbines from residential premises following sustained criticism of the current 500m standard by rural community groups.