Wildlife populations drop by almost 60 per cent since 1970

‘Wildlife is disappearing within our lifetimes at an unprecedented rate,’ says WWF 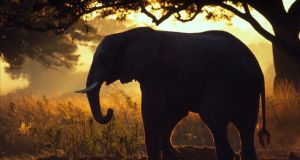 An African elephant in Zimbabwe - a species which has seen numbers crash due to poaching. Photograph: Martin Harvey/WWF/PA Wire

Worldwide populations of mammals, birds, fish, amphibians and reptiles have plunged by almost 60 per cent since 1970 as human activities overwhelm the environment, the WWF conservation group said on Thursday.

An index compiled with data from the Zoological Society of London (ZSL) to measure the abundance of biodiversity was down 58 per cent from 1970 to 2012 and would fall 67 per cent by 2020 on current trends, the WWF said in a report.

The decline is yet another sign that people have become the driving force for change on Earth, ushering in the epoch of the Anthropocene, a term derived from “anthropos”, the Greek for “human” and “-cene” denoting a geological period.

Conservation efforts appear to be having scant impact as the index is showing a steeper plunge in wildlife populations than two years ago, when the WWF estimated a 52 per cent decline by 2010.

“Wildlife is disappearing within our lifetimes at an unprecedented rate,” Marco Lambertini, Director General of WWF International, said in a statement of the group’s Living Planet Report, published every two years.

“Biodiversity forms the foundation of healthy forests, rivers and oceans,” he said in a statement.

“We are entering a new era in Earth’s history: the Anthropocene,” he said. WWF is also known as the World Wide Fund for Nature.

The index tracks about 14,200 populations of 3,700 species of vertebrates - creatures that range in size from pea-sized frogs to 100 ft long whales.

The rising human population is threatening wildlife by clearing land for farms and cities, the WWF’s report said.

Other factors include pollution, invasive species, hunting and climate change.

But there were still chances to reverse the trends, it said.

“Importantly ... these are declines, they are not yet extinctions,” said Professor Ken Norris, Director of Science at ZSL.

“I don’t speak at all about doom and gloom - we do see a lot of positive signs,” Nel said.

One hopeful sign is a global agreement by almost 200 nations last year to curb climate change could, for instance, help protect tropical forests, slow a spread of deserts and curb an acidification of the seas caused by a build-up of carbon dioxide.

And a 2015 UN plan for sustainable development by 2030, seeking to end poverty with policies that safeguard the environment, would also help if properly implemented.

Also, some species are recovering. Last month, the giant panda was taken off an endangered list after a recovery in China.