Wherever I live, I have a bit of Waterford to take with me

You might pass a stretch of Viking wall, an 18th century townhouse and an old Quaker cemetery on your way to buy a pint of milk 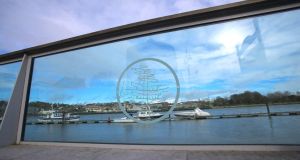 My first 18 years were spent living on John’s Hill in Waterford. In winter, my world revolved around an area that extended roughly five minutes in each direction from our front door. My summers were spent at the coast, mucking around in boats at Dunmore East, or hanging about “down around” in Tramore.

In a town like Waterford, you don’t have to seek the history out: it shoves itself in your face. This year, the city celebrates its 1,100th birthday, and everywhere you turn you see the evidence: intact sections of the old city walls, towers, medieval cathedrals. My grandfather, Michael O’Connell, was a well-known local artist who must have painted every corner of the old city during his lifetime, so now wherever I live, I have a bit of Waterford to take with me.

But as a teenager, I appreciated none of this: I was far more interested in when we’d get our first McDonalds and a proper multiplex cinema. It took leaving Waterford for me to realise how unique it is to live in a small city where you might pass a stretch of wall built by the Vikings, an elegant 18th- century townhouse and an old Quaker cemetery, all on your way to buy a pint of milk. I ended up going to school with the descendants of some of those Quakers at Newtown School, a remarkable place where students are taught to question rather than just to accept.

Waterford has had its ups and downs in recent years: factory closures, the highest unemployment rate in the country, and little by way of foreign investment. But, as its history would suggest – it has survived a Norman invasion, a plague, a Cromwellian siege, and fighting during the Civil War – it is a city that stubbornly refuses to be beaten.

If it has only recently begun to properly exploit its history to attract tourism – with the development of the Viking Triangle and the relocation of the Waterford Museum of Treasures into three historic sites around the city – it hasn’t been so shy about taking advantage of the beauty of its natural setting. Waterford makes good use of its location on the water: it is one of the few cities where you can sail straight in, and berth up at the marina on the quay.

One of the best things to emerge out of the ashes of the economic upheaval is a more vibrant arts and cultural scene. The city is home to Red Kettle theatre company, Garter Lane Arts Centre and the Theatre Royal. This year, Waterford will host a new play by Jim Nolan and a new Irish opera, along with a festival of architecture and regular music gigs by Red Kettle Sessions. And then there’s the Spraoi, the now annual international street arts festival which is held over the August bank holiday.

These days, my ideal Waterford weekend would involve a rummage through the antiques at Keighery’s City Auction Rooms, a bit of seafood at the Strand in Dunmore East, followed by surfing with the kids in Tramore, dinner in Bodega, before some music at one of the Red Kettle Sessions events. There would have to be a pint in Downses or Geoff’s to round off the evening.

Since leaving, I have lived in Dublin, Paris and Sydney, but nothing matches the thrill I get driving over the bridge, and seeing the lights from the buildings along the quay reflected in the Suir. That’s when I know I’m home.

Case of Covid-19 confirmed at community crèche on UCD campus 22:24
Make a Day of It: Get back into your favourite city centre, Dubs urged 20:48
Gardaí find potential breaches of Covid-19 rules in 14 pubs over past week 20:29
Coronavirus: 40 new cases and one more death confirmed by Nphet 20:13
Murdered garda’s family thank all who helped secure Brady conviction 19:42