When green fields were turned to gold with bribes 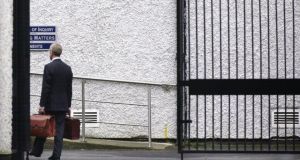 Frank Dunlop attending the tribunal. He admitted his involvement in Carrickmines in 1991 was his “first carriage in the train of corrupt practices”. Photograph: Bryan O’Brien

Remember the dark and sinister 1974 film Chinatown? Roman Polanski’s masterpiece featured Jack Nicholson playing a private detective hired to expose an adulterer who finds himself caught in a web of deceit, corruption and murder.

The sub-plot involved ruthless land baron Noah Cross (played by John Huston) bribing the Los Angeles water services department to divert water to the San Fernando Valley in the middle of the night – not just to irrigate his orange groves but to open up the desert for development.

Bit like what happened in the Carrickmines valley in south Co Dublin, as the Mahon tribunal found.

Or, indeed, like much of what went on in the 1980s and 1990s when green fields were turned into gold, and the county council became “the real estate agency that represents us”, as Nuala Ó Faoláin called it.

For speculators, the name of the game was to purchase (or at least acquire options on) agricultural land with development potential and then set about having it rezoned – thereby massively increasing its value.

If certain councillors needed to be bribed to facilitate this lucrative transformation, so be it.

In the case of Carrickmines, two parcels of land totalling 130 acres – both zoned for agriculture and with poor access – were almost certain to benefit from two major public investments then being planned: a new sewerage scheme and the final leg of the M50 – the South Eastern Motorway as it was then called.

Knowing where the lines of the sewer and motorway were likely to end up was crucial information that any speculator would want to lay his hands on.

And businessman Jim Kennedy, described by one tribunal witness as a “hustler, wheeler-dealer type”, managed to get his hands on the relevant map way back in 1984.

“The tribunal inquired into an allegation that an official of Dublin County Council prepared a map of the Carrickmines lands which contained sensitive and [then] unpublished information relating to the proposed rezoning of those lands...which was then surreptitiously provided to an engineer ...” its report says.

Kennedy told an associate that he had got a “privileged and confidential private map” – so sensitive that it was to be kept “under lock and key”.

The official who provided it subsequently felt “duped”, but, armed with the map, Kennedy proceeded to acquire a 108-acre farm in Carrickmines for £540,000.

Increase enormously
“The tribunal was satisfied that the confidential and commercially-sensitive information contained in the map prompted Mr Kennedy and Mr John Caldwell [his solicitor and partner] to complete the purchase of the ... lands, certain in their expectation that the value of the lands would increase enormously when rezoned.”

Others figures such as Dr Austin Darragh, architect Brian O’Halloran and businessman Gerard Kilcoyne, who had bought a smaller parcel of 22 acres next door in the late 1970s, lived in the hope that they would make pots of money when it was rezoned.

“Things are hotting up, services are imminent and, after holding it for 10 years, suddenly our land is valuable. To quote an acquaintance of mine, a builder and a Fianna Fáil councillor Larry Butler ‘your land is going to rocket in the next two years’,” wrote O’Halloran when it looked more and more likely that they would succeed.

They are referred to in the report as “the O’Halloran Consortium” and, like Kennedy, they engaged lobbyist Frank Dunlop to progress the rezoning. However, unlike Kennedy, the tribunal made no adverse findings against the consortium, saying its members had no knowledge of the bribery and corruption that went on.

Kennedy himself, an Isle of Man resident, declined to give evidence to the tribunal and could not be compelled to do so. Ownership of the 108 acres was vested in Paisley Park Investments, registered in the Isle of Man, with two companies listed as shareholders, one of them based in Panama. It was as opaque as you can get.

Dunlop – “a seller of ideas” – was paid £25,000 in cash by Kennedy with the specific purpose of bribing key councillors to sponsor or support rezoning motions in 1992 and 1997. The lobbyist himself was to get a “success fee” of £250,000 if the land was rezoned (later converted into 1 per cent of its enhanced value).

The money Dunlop used to bribe councillors was in cash, not in brown envelopes but “contained in cellophane bags using Ulster Bank wrappers”, which he kept at home amidst the “confluence of funds out of which he was making payments in the period May/June 1991 in the context of another development [Quarryvale].”

Dunlop told the tribunal that his relationship with Kennedy was “in the dark areas of my life and other people’s, it is as simple as that”. He also admitted that his involvement in Carrickmines in 1991 was the “first carriage in the train of corrupt practices” that he had carried on and for which he alone served a prison sentence.

Chief witness
Last week the trial on corruption charges of Kennedy, three former councillors and one serving councillor, collapsed after the chief witness against them – Dunlop – was too ill to continue giving evidence. The DPP then decided to drop all the charges, although Kennedy may t be pursued by the Criminal Assets Bureau.

Given that no one else has been charged with corruption in relation to the spate of otherwise inexplicable land rezonings that took place in Co Dublin during the 1990s, the delayed publication by the tribunal of its “Carrickmines module” may be regarded as the final instalment of this squalid business. As a Los Angeles cop told the Jack Nicholson character after the savage denouément of Polanski’s film, “it’s Chinatown.”