One side cites nature concerns, the other road safety – but neither is happy 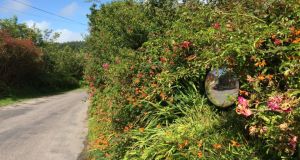 The ban on hedgecutting which lasts from March 1st to August 31st, is designed to encourage biodiversity by protecting habitats during nesting and breeding season. Photograph: Dan Griffin 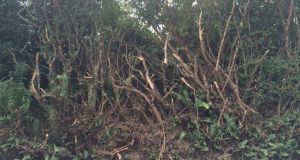 The annual closed season for hedgerow cutting officially ends on Tuesday, meaning vegetation may then be legally cut, grubbed, burned or destroyed. But as anyone in west Cork can tell you, the activity tends to get under way a lot sooner than that.

The ban, which lasts from March 1st to August 31st, is designed to encourage biodiversity by protecting habitats during nesting and breeding season, but conservationists say illegal cutting within those dates is a widespread problem.

“In April, I was going into town and the whole of the left-hand side of the road, all the way from Baltimore to Skibbereen, had the crap cut out of it,” says Sherkin Island resident Barry Mahon. “That would have been bang in the middle of nesting season.”

Mahon asked around but no one knew who carried out the work. “They said this gang turned up and they just set off from Baltimore and cut everything on the left-hand side of the road.” There was, he says, “murder” over it.

Ireland doesn’t have much forest to boast about but it does have hedgerows. Planted since the 18th century by landowners, they cover about 450,000 hectares, or 6.4 per cent of the country, and run to a length of about 300,000km.

They act as wildlife corridors, allowing species to get from one area to another safely; birds use them for nesting, bats for navigation. They provide an important source of food for animals, being full of fruit bearing plants and trees such as hawthorn, blackberry, rowan, apple and plum.

“Literally hundreds of species of insects depend on our hedgerows,” says Flynn. “We depend on lots of those insects as pollinating and predatory insects.”

Back in west Cork, filmmaker Vivienne DeCourcy complains about the state of the Baltimore to Lough Hyne road, which was stripped of most of its montbretia and fuschia flowers after extensive cutting about five weeks ago.

“The fuschia is gone and all the birds nests and bees are gone,” she says.

The situation is much the same on nearby Ringarogy Island. “It was brown and disgusting until about 10 days ago,” she says. Some ferns have since returned, making the remaining hedges a bit greener, if not necessarily attractive.

DeCourcy says she understands most of the cutting is done for the sake of road safety but argues that mirrors and speed bumps would be better alternatives.

For others, hedgerow cutting during the summer months is a case of reality prevailing over out-of-touch bureaucracy.

“I’m a commonsense man but there’s not a lot of that around any more,” says a local building contractor who doesn’t want to be named. “The main growth is during the summer and that’s when you’ve most traffic.

“The road to Baltimore was cut there about a month ago and it was fantastic. I don’t care who cut it or what way it was cut but people’s safety is number one before anything else and that’s the way I look at that kind of stuff.”

The rules should be more flexible, he says. “When I drive the road I get annoyed about it. It’s a pain in the ass. The people that make the laws about environmental issues are able to get their point across, whereas the ordinary person doesn’t bother fighting back and arguing about the common sense issues. They don’t make the same noise.”

Earlier this year, Minister for Arts, Heritage and the Gaeltacht Heather Humphreys set up a working group to consider about 190 submissions from individuals and groups as part of a review of the hedge-cutting law.

The Irish Farmers’ Association, as well as the Association of Farm Contractors in Ireland, proposed shortening the closed season. They argue that by the end of July nesting has finished and, furthermore, August is a peak month for farm machinery on roads.

In his submission, senior conservation officer Alex Copland wrote that birds such as greenfinches, linnets and yellowhammers were still found in nests in August. The closed season should not be shortened, he said. Instead it should be extended until mid-September in yellowhammer areas.

According to a spokeswoman at the Department of Arts, Heritage and the Gaeltacht, the Minister will announce the outcome of the review “in the near future”.

What it will mean for the hedgerows of west Cork and beyond remains to be seen but any changes to the closed period would require amending legislation. Whether the Government will get around to that during the remainder of its term is another matter.