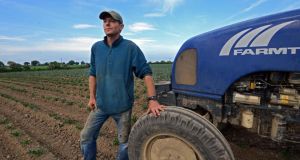 A farming family who may lose two fields and a total of 40 acres of their land if the proposed Clonshaugh sewage treatment plant goes ahead say they will keep on fighting.

PJ Jones (77) and his son Joe Jones say they are upset at Fingal County Council’s plans to develop the plant next to where they live and work. The horticultural farmers have been vocal in fighting the proposal and, alongside their neighbours, they say they will continue to protest.

“I would have to change my whole system of farming if this goes ahead. We don’t know how long it would take to develop. It could take 10 years and it could take more if we fight it, which we will be doing,” said PJ, who has been farming for more than 50 years. He added that his biggest concern is the smell.

“Tomorrow I’m going to consult my solicitor and take his advice.”

PJ Jones said that in times of economic prosperity, people offered hundreds of thousands of euro to buy his land which could now be used as the site for the plant, but he had declined all offers.

“[The plant] would see 40 trucks a day taking the waste right outside our houses. At the moment, we’re just upset. We’re farmers. We are not in the business of selling land.”

He put two signs showing his opposition to the plant’s development outside his gate, adjacent to where the plant’s entrance would be.

Other businesses in the area say they will also be protesting at yesterday’s announcement. Manager of Martin’s Pub in Clonshaugh Shopping Centre Aidan Carroll said he did not protest at the proposals to build the treatment plant in the area before, but that he would “make it his business” to do it now.

“This is really going to affect the housing here. I have two neighbours trying to sell their homes in the area and I doubt they’re going to get the asking price for them now.

“Why would they want to put it beside the airport, hospitals, hotels and schools here? It could drive people who want to start families away from here,” he said.

Mr Carroll added that his pub often attracts tourists and it could put people off.

“I don’t think people actually thought Clonshaugh would be chosen. I know I didn’t think it would come this way,” he said.

“It will make the area a less pleasant place to live.”

Manager of Corr’s Pharmacy in Clonshaugh Shopping Centre John Corr, who has operated in the area for around 19 years, said no matter where the plant is proposed, there will always be people objecting to its location.

“It has to go somewhere. No one wants it in their back yard,” he said.

“If this is the least worst choice and then as long as it meets best international practice. Just as long as it isn’t another botched job.”