‘We couldn’t afford to wait – it was the sea or us’, say islanders

Community describes 10-day effort to save its shoreline after storms

Following a series of severe stroms in recent months the island community of Inishbofin embarked on a ten-day-long voluntary effort to rebuild part of its northern shoreline. Video: Marie Coyne 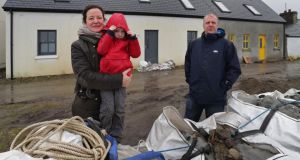 Céline and Ronan Coyne and their son Cormac (4) at their house which was hit by waves at East End village on Inishbofin after the pier was destroyed. Photograph: Joe O’Shaughnessy.

Imagine a northeasterly swell reducing a stretch of Dún Laoghaire’s east pier to rubble, splitting James Joyce’s Martello tower off from Sandycove, and forcing the immediate community to round up dumpers and diggers to save waterfront homes.

“We just couldn’t afford to wait – we were on our own, and it was the sea or us,”says Inishbofin Development Company project co-ordinator Simon Murray of his island’s 10-day-long voluntary effort to rebuild part of its northern shoreline.

For even as the more recent storms focused their intensity on the south and southwest coasts, many of the islands extending from west Cork’s Cape Clear right up to Donegal’s Tory enjoyed little respite, with little access to emergency State assistance.

“It seemed to come at us from every direction – we were enveloped,” Murray says of Storm Brigid, which will be remembered for a long time to come.

While the first of the depressions in late December was strong enough to tear off the Gun Rock navigation light in the main harbour, it was the St Brigid’s Day system that took everyone by surprise.

“The strange thing was that there was very little wind,” Ronan Coyne recalls.

Coyne, an information technology specialist living with his wife Céline and four-year-old son Cormac on the island’s East End at Rusheen, remembers that he set his alarm for 6am high tide, woke to a flash of lightning and heard what he thought was a thunder roll.

“When I opened the front door, the sea was right up to it, waves crashing over the wall in front of us and running up between the houses, and stones striking the windowpanes,” he says.

“And as the day broke, and I looked out from the upstairs window, I could see the entire East End pier had collapsed. It was probably just two waves that did it. That was the rumble – it wasn’t thunder at all,” Coyne says.

Words cannot adequately describe the impact that the 19th-century pier’s destruction has had on the island’s psyche.

“Can you calculate the ferocity of the wave that can do something like this?” Murray says, as we pick our way over thousands of pieces of cut stone, once quarried and ferried in by donkey and cart, and hauled into place by a 100-strong construction team back in 1892.

Sections of the snapped sea wall jut incongruously from the rubble, while a gable has been ripped off the remains of the stone-built fish curing station, dating from 1897, where barrels of fish were once prepared and stacked to be transported out by French buyers.

Even as the pier was being demolished, mountainous waves over at North Beach were ripping open the shoreline there, gouging a deep trench into Lough Bofin behind and flooding the only road out – cutting off 13 houses, including Murray’s own.

The sedimentary lagoon, protected by the cobbled beach, is one of only a few such examples in Europe and is an integral part of the Connemara island’s special area of conservation status.


‘Apocalyptic’
As Murray tried to drive out in his jeep, a wave struck it and it “aquaplaned” for several metres. “It was apocalyptic,”he says.

“Seven diggers from the island came out, and we began retrieving the beach from the lake and shoring it up,” he says. A three-metre high bulwark was constructed over 10 long days, with Marie Coyne of Inishbofin’s Heritage Centre documenting the work on camera. “Ask not what your island can do for you, but what you can do for your island,” the volunteer appeal read.

“We knew we would have lost the road altogether if it was left underwater any length of time,” Murray explains. “We estimate that we probably saved the county council about €400,000.”

“Had we waited for the State, we would still be waiting for environmental impact statements, National Parks and Wildlife Service approval, foreshore licences, the works. Of course there has to be a procedure for best practice, but this was a case of survival,”he says.

Urgent repairs are still required. In the main harbour, which was buttressed with State funds to prevent erosion several years ago, chunks have been torn out of the lower shore road along a half-mile distance, rendering it hazardous for drivers.

On the East End, the community filled sandbags to protect what was left of its sea wall, but its houses are now exposed without the pier, and more high tides are forecast for next weekend. Ironically, a Galway County Council report had recommended decking to reinforce the structure several years ago

The local authority is already revising its initial estimate of €18.2 million in storm costs, while Minister for the Marine Simon Coveney told the Dáil on February 12th that up to 100 publicly owned piers, harbours and slipways “linked to fisheries and aquaculture” had been damaged, and that an additional €8.8 million was being allocated for repairs.

Inishbofin fears it may be forgotten about, however, particularly amid the post-storm commentary about the cost of coastal protection and the need to make “hard decisions” about “surrendering parts of the coastline” – an approach criticised by some geographers.

It was this type of Malthusian attitude that led to the forced depopulation of neighbouring Inishark in 1960, abandoning fine agricultural land for the want of a proper pier, islanders point out.

“If we are only to be judged in economic terms, we generate so much in tourism revenue,” Murray points out. “For a population of less than 200, we must make a substantial contribution per head to State coffers, and it’s only reasonable to expect some support for that.”