Water on lower Shannon down 500mm from Christmas peak

Drone footage shows the extent of the flooding on the Shannon showing around Monpelier, Castleconnell and looking across the river towards Springfield on the Clare side. Video: Tony Grehan 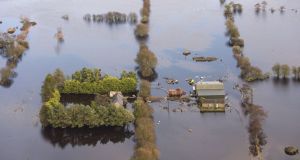 The National Co-ordination Group met on Monday to review the flooding crisis around the country and the response of the emergency services to it. Photograph: Brenda Fitzsimons/The Irish Times

Water levels on the lower River Shannon are now 500mm lower than they were at their peak during the Christmas period, Clare County Council confirmed on Monday.

Local authorities, the Army and other bodies continued to assist those affected by flooding in recent weeks and a number of houses around the country are still under threat, however.

The National Coordination Group met in the (NECC) National Emergency Coordination Centre in Dublin on Monday to review the situation and the response of the emergency services to the flooding.

It said over 800 properties, including homes, had been affected since the onset of flooding early in December, while many others were at risk from flooding and experiencing access difficulties.

In a statement, the group said the local authority response continued to be supplemented by the Defence Forces and other service providers “when and where required”.

It advised people to be vigilant when travelling on roads as there may be local flooding or debris in areas where flood waters have subsided.

“Travelling at reduced speeds in the affected areas is also advised. Road users are advised to check local authority websites for information on roads affected by flooding, and on diversions or alternative routes.”

Clare County Council said the ESB planned to reduce the flow of water downstream from Parteen Weir from 440 cubic metres per second (cumecs) to 405 cumecs.

The discharge rate was now at its lowest level in two weeks, the council said.

Water levels on the lower River Shannon at Springfield, Clonlara, were 500mm (50cm) lower than the peak levels recorded during the Christmas period.

Westmeath County Council said, meanwhile, it was hoping to begin decommissioning flood defences in Athlone by the end of next week.

Director of services Barry Kehoe said levels on the Shannon had not changed significantly over the weekend.

“It is declining at around 3cm per day at the moment. It needs to go down another 35 to 40cm before we start decommissioning the major defences.”

Mr Kehoe said the defences would not all be lifted at once and that decommissioning would not take place if heavy rain is forecast.

As flood defences are removed clean up and road repair operations will get underway.

Mr Kehoe said the Defence Forces were continuing to assist with pumps and transportation and were likely to be needed over the coming weeks.

“It has been a long haul since the 7th of December which is when we started and people are tired,” he said.

A number of homes in Carrickobrien and Golden Island remain marooned and transport to and from these areas is a priority for the council.

A meeting of the flood-response coordination group will take place in Westmeath on Tuesday morning.

Meanwhile, River Shannon levels in Offaly have reduced by over by over 170mm in Banagher and 150mm in Shannonbridge from their peak .

In Galway, there was still concern about seven houses under threat from flooding in the Clonfert area. Galway County Council’s director of services Liam Gavin said flooding had subsided a good bit in the past week, but there were areas in the south of the county and the Shannon catchment that still had issues.

These included the Meelick, Eyrecourt and Clonfert areas.

Met Éireann said Tuesday would be cold and windy, with sunny spells in most areas but showers too. These would be heavy in the east and north. The weather will remain cold for the rest of the week with frosty nights and occasional wintry showers.