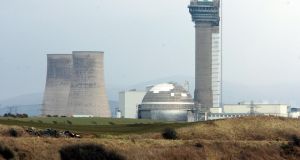 That is the view of the Radiological Protection Institute of Ireland (RPII) which today published a study on the possible impacts for Ireland of up to eight new nuclear power plants, the closest of which would be 100 kilometres from Ireland.

Under its energy sustainability programme Britain is proposing to build eight new nuclear plants by 2025, five of which are to be located close to the Irish sea on Britain’s west coast.

The RPII study commissioned by former minister for the environment John Gormley in 2010 showed that Ireland was at a very low risk, and even in a worst case scenario when the wind was blowing east to west, and rain was falling, a severe accident would not require people to leave their homes here.

But the RPII stressed this was a worst case scenario representing a severe accident for which there was a one in 33 million chance. While members of the public would be exposed to 18 times their recommended safe limit of 1,000 units of man-made radiation per year, this was still less than the recommended safe limit for workers in a nuclear facility, which was 20,000 units.

The report also examined the possibility of a large accidental release of radioactivity to the Irish Sea, equivalent in size to that of the Fukushima accident which happened in Japan in 2011. It found those who eat large amounts of fish and shellfish from the Irish Sea would receive less than the annual radiation dose limit for members of the public.

The RPII stressed these situations were extreme and the routine operation of the proposed nuclear power plants “will have no measurable radiological impact on Ireland or the Irish marine environment”.

The full report, including summary, is available on www.rpii.ie