UN Climate Change Conference: ‘I will be embarrassed to be Irish in Paris’

Trócaire, Oxfam Ireland and Friends of the Earth will be watching as world leaders meet for the Cop21 summit. They’re already disappointed by the Government’s ‘inaction’ 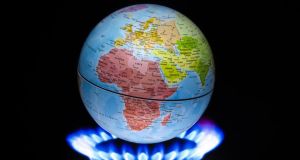 Global warming: “We are the last generation who can limit the amount of greenhouse-gas emissions,” says Bernie Connolly of Cork Environmental Forum. Photograph: Lionel Bonaventure/AFP/Getty

Just over a year ago, as the UN Climate Summit met at United Nations headquarters in New York, 400,000 people took to the streets of the city for the People’s Climate March, the largest-ever climate-change demonstration. Now, as Paris prepares to host the United Nations Climate Change Conference, which starts on November 30th, Irish nongovernmental organisations are uniting for a series of People’s Climate Marches in Dublin, Belfast, Cork and Galway on Sunday, November 29th.

Groups such as Trócaire and Oxfam, which are chiefly concerned about the impact of flooding, drought, disease and food scarcity on developing countries, will join Friends of the Earth and Stop Climate Chaos campaigners.

Together they are seeking community renewable-energy projects, sustainable, liveable cities, the phasing out of fossil fuels, and “decent work for all in the transition to a low-carbon society”. Trade unionists, church-goers and youth groups will walk the streets together, calling for national and international action on climate change.

“The crucial thing is that we are the last generation who can do something to limit the amount of greenhouse-gas emissions to keep global temperature below the catastrophic 2 degrees above pre-industrial levels,” says Bernie Connolly of Cork Environmental Forum, one of the main organisers of the People’s Climate March in the city.

“The pope’s encyclical on climate change, Laudato Si’, has meant that we are reaching a much wider constituency through Eco-Ccongregation Ireland” – an interdenominational group that helps churches be environmentally aware in the context of their Christianity – “and parishes who want to do something positive to limit the damage we are all causing.”

The marches in Ireland will help to create an impetus for the smaller group of campaigners that will then travel to Paris, either to observe negotiations or to protest.

Ciara Kirrane of Stop Climate Chaos, a coalition of civic-society organisations, says, “We see Paris as a beginning rather than an end. It’s an opportunity to start connecting people’s demands for justice, equality, food, jobs and rights and to strengthen the movement, to force governments to listen and act in people’s interests and not in the vested interests of elites. Paris will launch us into 2016 as a year of action for people’s demands and solutions to take centre stage. For instance, we need Ireland to have a national mitigation plan to reduce our emissions now.”

Prof John Sweeney, the Maynooth University climatologist, has provided Irish NGOs with a briefing document, Preparing the Road to Paris, in which he outlines the scientific, ethical and political background to the conference and explains key negotiating issues, such as whether countries will pledge money to the UN’s Green Climate Fund from their development budgets or from new funds, or whether emission-reduction agreements will be legally binding.

Among other things, this technical knowledge will allow NGO protesters to tailor their banners to how negotiations go at the Paris conference (which is also known as Cop21, as it’s the 21st annual conference of the parties to the UN Framework Convention on Climate Change, which was adopted at the Earth Summit in Rio in 1992).

The legacy of failed climate-change talks in Copenhagen in 2009 has made NGOs more cautious about the importance of any single event and more focused on the bigger picture.

Oisín Coghlan of Friends of the Earth will attend the leaders’ event on the opening day of the Paris conference. “The political negotiations are just the framework; the real action has to happen afterwards, in terms of changes to industry, buildings and energy,” he says.

“The problem with Ireland is that while we are in talks about emissions targets for 2030, we won’t reach our 2020 targets. The Irish Government’s approach has been one of short-term special pleading. When Enda Kenny speaks about climate change I don’t get the sense that he sees it as a real threat to our lives. I will be embarrassed to be Irish in Paris.”

An Taisce will also be represented in Paris. John Gibbons of the heritage organisation says: “Our role is to apply pressure to those involved in the negotiations and to inform the media, the public and politicians here that the Irish Government is going to Paris with nothing.

“Most political effort here has been to water down our commitments. Ireland is a first-world country which is too interested in growth and business as usual to act in a climate-constrained world. We will be looking for whatever pledges the Irish Government makes to be honoured.”

Campaigners from organisations such as Oxfam Ireland will attend the negotiations as observers. David Healy, the charity’s policy and advocacy officer, will spend five days there. “We will circulate our briefing to the negotiators in advance, outlining our key priorities, and then we will comment and advise on the textual proposals as they emerge.

“It can be a remarkably frustrating process, but we will be working with the wider Oxfam organisation. Our key issue is climate finance. We need to ensure that climate finance meets the adaptation needs of the developing countries as part of the agreement.”

Healy is one of the few campaigners who was at the Copenhagen summit in 2009. “It’s a different dynamic to Copenhagen. The national pledges had to be made in advance of Paris, whereas in Copenhagen they were brought to the table at the last minute, and no agreement was reached.

“In Paris there won’t be the same emphasis on a final agreement but on figures that will have to be ratcheted up in the next few years. It’s not liable to failure in the same way.”

Jerry MacEvilly of Trócaire, will also follow the talks for their full 12 days. “My role is to make clear any weaknesses in the negotiated text and make sure the voices of our partners in the developing world are heard. The protection of human rights needs to be a central part of the binding agreement, as some climate actions can impact on food security.”

Stop Climate Chaos is organising a bus of 50 activists to go to Paris to join thousands of others from around the world for the final days of the UN conference, which will be followed, on Saturday, December 12th, by an international day of action in the city.

Backgrounder: What exactly is Cop21?

Cop21 is the 21st annual conference of parties to the UN Framework Convention Framework on Climate Change.

This international group, which held its first conference – Cop1 – in Berlin in 1995, meets to review the convention adopted at the Rio Earth Summit in 1992, whose aim is to stabilise the levels of greenhouse gases in the atmosphere.

Cop21 will be held just outside Paris, at Le Bourget exhibition centre, between Charles de Gaulle airport and the city, from November 30th to December 11th.

It will be attended by political leaders and negotiators from more than 190 countries. About 20,000 delegates, 14,000 observers and 5,000 media are expected.

It will be the largest diplomatic event that France has hosted, as well as one of the largest climate conferences ever held. The French government has encouraged NGOs to be involved in Cop21, and about 2,000 organisations are expected to attend. Le Bourget will include Climate Generations, a civic-society space, also open to the public, where the groups can share their ideas, campaigns and proposed solutions to climate change. “The world will be struck by the intensity and diversity of involvement by civic society at Cop21,” says the French ambassador to Ireland, Jean-Pierre Thébault.

As France’s former ambassador for international environmental negotiations and sustainable development, he has met many of the Irish NGOs in the build-up to Cop21. “I expect NGOs to be very impressive, both in their knowledge of the negotiations and in showcasing best practice for the future implementation that will be needed after the agreement in Paris,” he says.