3,000 applications made under plan to halt cutting on certain bogs 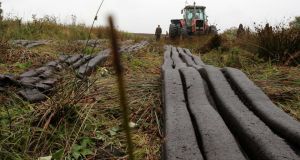 The compensation payments have been made to turf-cutters who were required to cease cutting on 53 raised bogs as special areas of conservation under the EU habitats directive. Photograph: Hany Marzouk

The Government has spent almost €9 million to date on compensation payments to turf-cutters affected by the designation of 53 bogs as special areas of conservation. Almost 3,000 applications for compensation under the cessation of turf-cutting compensation scheme were received by the department to the end of May, according to briefing documents prepared for the new Minister for Arts, the Heritage and Gaeltacht, Heather Humphreys, on her assumption of the role earlier this month.

Between 2011 and the end of May this year, the department spent €7.5 million on more than 4,500 compensation payments made to turf-cutters who were required to cease cutting on 53 raised bogs as special areas of conservation under the EU habitats directive. It also paid out a further €549,000 in once-off incentive payments of €500 to 1,098 affected turf-cutters to the end of May, while a further 503 turf deliveries had taken place at a cost of €900,000.

A department spokeswoman said applications for compensation under the scheme continued to be received. Of the 2,949 applications received by the department by May 31st last, 820 turf-cutters had expressed an interest in relocating to non-designated bogs.

The briefing documents prepared for the minister said 25 turf-cutters had been accommodated in Killeranny Bog, a relocation site in Co Offaly, where cutting has occurred both in 2013 and 2014. Twenty-three turf-cutters were recently accommodated between the Islands Bog and Killosolan Bog in Co Galway. The briefing notes state that a further 15 relocation bogs are considerably advanced in terms of site assessment and negotiations with land owners.

When asked whether any action had been taken in the year to date against turf-cutters operating on designated conservation areas sites, a spokeswoman for the department said a number of individuals had been “apprehended in the act of cutting this year, arising from aerial and ground surveillance”.

“Gardaí are continuing to gather evidence when illegal turf-cutting incidents occur and are preparing files for the Director of Public Prosecution,” she said. “Where machinery is found on site, the operators are interviewed and cautioned by the gardaí, where possible.”

The spokeswoman added that while some cases from 2013 were due before a number of District Courts, these were likely to be held up on foot of a judicial review of the relevant provisions of the European Communities (Birds and Natural Habitats) Regulations 2011.

Meanwhile, the department has issued more than 200 application forms for a separate scheme to compensate turf-cutters who were required to cease cutting on bogs designated as National Heritage Areas (NHAs), with about 50 completed forms received to date. By mid-June, the department had issued 90 permits to individuals which allow them to cut turf on NHA sites until the end of 2016, while a further five permits have been issued to contractors.