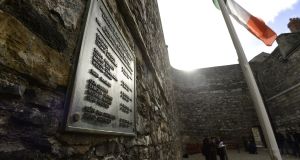 Kilmainham Gaol has been named the top landmark to visit in Ireland for the fourth year running in the TripAdvisor travellers’ choice awards. File photograph: Cyril Byrne/The Irish Times

Kilmainham Gaol has been named the top landmark to visit in Ireland for the fourth year running in the TripAdvisor travellers’ choice awards.

Dublin’s historic prison, where the signatories of the 1916 Rising Proclamation were detained before execution 100 years ago this month, claimed the number one spot ahead of Blarney Castle, which came second, and Trinity College Dublin, which got third place.

The winners of the awards were determined using an algorithm which analysed the quantity and quality of TripAdvisor reviews over a 12-month period.

The ancient Inca city of Machu Picchu in Peru was named as the world’s best rated landmark, rising from second place last year. Built in the 15th century, the world heritage site stands at 2,430m above sea-level in the middle of a tropical mountain forest.

It was abandoned when the Incas were conquered by the Spaniards in the 16th century and was not known to an international audience until 1911.

3. Church of the Saviour on Spilled Blood, St Petersburg, Russia