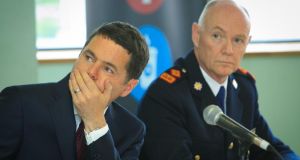 Drivers caught breaking speed limits for the first time may be ordered to undertake intensive training instead of receiving penalty points under proposals being developed by the Road Safety Authority (RSA).

The changes could be in place by year-end or early next year and may be included in forthcoming legislation to allow roadside tests for drug driving, which Minister for Transport Paschal Donohoe said would be published in September.

The proposals emerged as a review by the RSA and the Garda of road fatalities so far this year showed deaths declining, with 92 between January and July, compared to 101 in the same period last year.

However, “frightening” trends have emerged, with nine people dying already this month.

“Should our record continue as in July with 20 deaths a month, as many as 100 more people could lose their lives by year end,” said RSA chief executive Moyagh Murdock .

Fatalities have also risen in the 56-65 age bracket, from 11 deaths in 2104 to 17 this year. Ms Murdock said complacency was a concern and with older drivers it could be a “mid-life crisis”, an attempt to recapture their youth through speeding.

Fatalities among 16-25 year- olds had also increased from 19 in the first seven months of 2014 to 23 in the same period this year.

Ms Murdock said this could be due to more disposable income and among students an increase in the distances travelled because of a lack of accommodation near college.

The RSA is in discussion with experts in the UK, where intensive classroom-based driver awareness courses are provided for drivers who exceed the speed limit by 15-20km/h. Similar excess speeds are under consideration in Ireland.

Ms Murdock said while drivers might want to take the course to avoid the penalty points, it was not an “easy option”. Motorists would have to pay for the course as part of the penalty.

AA director of consumer affairs Conor Faughnan welcomed the proposals, noting they had proved a “very successful deterrent” in the UK.

Under the British system, the court decides who has the option of driver school. However, Mr Faughnan suggested offenders in Ireland be offered three choices – automatic penalty points, a court appearance or driver awareness training.

Mr Donohoe said he was “particularly shocked by the statistics in relation to seat belt use”.

He welcomed the reduction in road fatalities compared to last year, but said “nobody can afford to be complacent in our joint efforts to reduce fatalities and reduce serious injuries on our roads”.

Ms Murdock said there was a 50:50 chance of dying in a collision without a seat belt on, no matter how minor it was.

Supt Con O’Donohue of the Garda National Traffic Bureau said 88,409 speeding tickets had been issued this year. He said compliance was now at almost 99 per cent in “ safety camera zones”.

He said 4,715 drivers received penalty points for non- use of seat belts, while there were 13,560 mobile phone detections and 3,666 for drink driving.