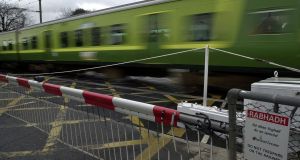 A proposed traffic management plan for the Sandymount to Blackrock area of south Dublin would involve closing Merrion Gates to through traffic and the compulsory purchase of approximately 35 properties. Photograph: Eric Luke

A new plan to tackle the serious traffic and transport problems on the south Dublin coastal strip between Sandymount strand and Monkstown has been put out for public consultation.

A continuous pedestrian and cycle route running from Irishtown, on the city centre side of the strand, to the Seapoint area of Monkstown is included in the proposals.

The closure of the railway level crossing at Merrion Gates to through traffic and a new link road between Merrion Road and Strand Road are also proposed in a consultation document released by the National Transport Authority and Minister for Transport Shane Ross. The scheme is being put out to public consultation until December 16th.

NTA chief executive Anne Graham said the scheme, if approved by An Bord Pleanála, would cost between €40 million and €48 million and would take two years to complete. The NTA confirmed the compulsory purchase of approximately 35 properties would be required.

It aims to improve the rail service as well as travel times for buses and cars, and to eliminate accidents and “near-misses” at Merrion Gates.

Part of the scheme involves a realignment of Strand Road, incorporating a new bridge over the rail line about 250m to the north of the current level crossing

Ms Graham said traffic and congestion at Merrion Gates had become more acute in recent years and this was an “imaginative and far-reaching” plan to address it. But she added that it was an “emerging preferred scheme” and nothing more.

“To ensure the plan is as good as it can possibly be, we are, from today, actively consulting with the public. If members of local communities, or public transport users, or cyclists, or road users or the business community have suggestions as to how we can do this better, we will certainly reflect that in the finalised plans.”

The full details of the scheme and the consultation are available at iti.ms/2dJoOw5