Demonstrators march through Dublin in opposition to energy plans 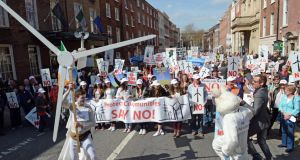 Thousands of rotesters from across the country have taken part in a demonstration in Dublin against the erection of wind turbines and proposed electricity pylons.

Organisers estimated about 7,000 people marched from Parnell Square on the city’s northside to Leinster House today.

The demonstrators accused the Government of failing to listen and engage sincerely with the communities affected by “flawed energy policies” which, they said, had the potential to damage the natural landscape as well as people’s health.

“We thought this was a good opportunity to get all of the groups around the country together for once, because the problem is interconnected,” said Pylon Alternative Alliance chairman Robert Duggan.


High-voltage networks
Proposals to upgrade Ireland’s transmission lines would see the construction of two overhead high-voltage networks consisting of hundreds of large pylons. One network would run from Kildare to Cork, the other through north Connacht.

Mr Duggan said people felt the Government was not listening to their views. Local residents were not consulted on “substantial questions” concerning the Eirgrid project, he said.

“Although we the people own the country we never consented to this,” he added.

Tomás Moynihan from Tombrack in Ferns, Co Wexford, said he was worried because “they’re considering putting pylons right through our lovely landscape and at the end of the day we don’t want that because of health risks.”


‘Huge support’
He said the anti-pylon campaign had “huge support” in his locality: “People are really angry over it there are meetings every day of the week in different villages around our area.”

Groups campaigning against wind turbines will have been relieved earlier this week when a plan to export wind energy from the midlands to Britain collapsed. The development means the proposed construction of 1,000 wind turbines in five midland counties will not go ahead for now.