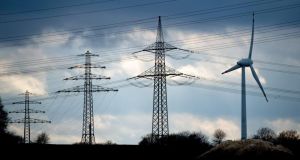 A wind turbine stands beside pylons in a field near Sehnde-Muellingen in the region of Hanover, Germany. Photograph: Julian Stratenschulte/EPA

Four thoroughbred horse bodies have warned that investments in the bloodstock industry could be lost if wind turbines are not kept a safe distance from stud farms and training yards.

Joe Osborne, managing director of Kildangan Stud, said investments in the industry could not be taken for granted and wind turbines must be placed at a suitable and appropriate distance from stud farms, stables and training yards. He said thoroughbred horses were particularly sensitive to noise and visual cues, unlike other farm animals.

“Any new guidelines should consider thoroughbred operations as being given special status in consideration of wind farm applications,” he said.

The Department of the Environment is revising wind energy development guidelines and Friday was the deadline for submissions from interested parties.

Bloodstock agent David Redvers said turbines and pylons were not conducive to the raising of top quality thoroughbreds. “I represent Sheikh Fahad al Thani of Qatar, who is currently investing heavily in the bloodstock industry worldwide,” he said. They were interested in basing some infrastructure in Ireland and were sourcing potential farms.

“However, it is with regret that we read of the plans to allow the construction of large numbers of electro-turbines and pylons in the areas traditionally associated with quality Irish stud land. It is our considered opinion that developments of this kind are not conducive to the raising of top quality bloodstock in the areas in which they are built. Therefore, we will be maintaining a watching brief regarding our future investments in Ireland,” Mr Redvers said.

The submission to the Department of the Environment noted that the thoroughbred industry directly employed 14,000 people and thousands more indirectly, making an economic contribution of more than €1 billion in 2012.

The submission said the bodies were not opposed to Ireland’s commitments to meet its renewable energy generation goals but believed the revised guidelines “should not facilitate insensitively-sited wind turbines from impacting negatively on the safe operation of thoroughbred studs, stables and training yards and, as a result, threatening the viability of the thoroughbred industry in Ireland”.

It highlighted the fact that thoroughbred horses had a highly-evolved flight response and were particularly sensitive to perceived visual or auditory threats. It said the safety of the horses, and their riders and handlers could be in danger because of a turbine being located directly within their range of vision or hearing.