Taoiseach promises Ireland will play its role on climate change 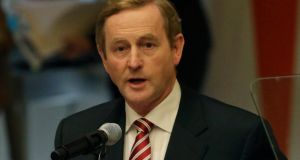 Ireland will play its part in the EU’s contribution to worldwide efforts to deal with “the stark reality of global warming”, Taoiseach Enda Kenny pledged in New York yesterday. In his speech to the UN climate summit, Mr Kenny said: “We will only succeed in tackling climate change if we adopt a sustainable and truly collective approach, one that is ambitious but fair, that is challenging but achievable.”

Saying that leading nations “have to step forward” so that others would follow, Mr Kenny said leaders “must show conviction” that the targets they set were fair and achievable to keep the rise in global temperatures below two degrees.

“Ireland has a strong and proud track record. With our EU partners, we overachieved on our first Kyoto Protocol targets. We have implemented a range of carbon-pricing instruments, including a carbon tax. We have long-term objectives for 2050 of an 80 per cent reduction across electricity, transport and built environment. We are a world leader in carbon-efficient agriculture and food production, a major component of Ireland’s economy.

“We will continue our efforts, for example through our Origin Green Programme, to drive carbon efficiency and shape the international approach to sustainable agriculture and food production.”

Without conceding that Ireland is now unlikely to meet EU targets for 2020, the Taoiseach said: “We are working within the EU to ensure a fair and effective burden-sharing of the EU’s overall commitment and we are implementing legislation to underpin our climate change efforts.”

Mr Kenny said Ireland understood the impact of global warming on the most vulnerable communities and had “worked closely with partners to ensure that action on climate change, including climate justice, is a key element of the UN Sustainable Development Goals”.

Ireland, he added, had “contributed generously” to climate finance for developing countries “despite our very challenging economic and fiscal circumstances in recent years”.

However, he made no explicit commitment to ramp up aid in this area, as the poorer nations demand.

He told reporters afterward the New York summit would be a precursor to another meeting in Paris. He hoped the Paris conference would not repeat the mistakes that dogged the Copenhagen summit in 2009.

“Copenhagen wasn’t the success that people might have imagined it should be, simply because agreement couldn’t be had from all of the leading nations.”

Friends of the Earth’s Oisín Coghlan said while Mr Kenny’s speech was “carefully crafted to sound the right notes”, it was short on substance. “I’m not convinced the Taoiseach really believes that he needs to lead a transformation of Irish society and the economy on order to contain climate change.”