Cabragh Wetlands Trust has turned the marshes around an old Irish Sugar factory into a bird sanctuary that is also, with its new visitor centre, a hub for environmental awareness 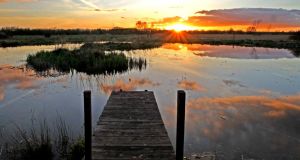 When the Irish Sugar Company opened its factory in Thurles, in 1934, it transformed the fortunes of the town and its hinterland. In an era of acute economic hardship, arising from a worldwide depression and a bitter trade war with Britain, the plant was manna from heaven.

Offering more than 300 well-paid, permanent jobs, plus seasonal employment during the “campaign” – the time of year when sugar beet was harvested – the Comhlucht Suicre Éireann facility processed a new and valuable crop at a time of depressed food prices.

Like many heavy industries of its time, however, it had an unwelcome environmental footprint. Sugar beet was washed before processing, and the sludgy effluent was, at first, released directly into the River Suir.

Initially, this was considered of little consequence when so much wealth was being created locally. But the Suir was renowned for angling, and during the 1960s the almost inevitable happened, and the effluent wiped out many fish. The series of kills drew attention to the untreated discharges, and a local angler, Bob Stakelum, spearheaded a campaign to clean the effluent before it was released.

In response lagoons were built that allowed the sludge to settle before the waste water was discharged. These “settling ponds” stopped the fish kills – and brought an unintended but welcome consequence. Waterfowl took an immediate shine to the lagoons, and wigeons, plovers, lapwings, gulls and curlews began to overwinter there.

In 1989 the Thurles factory closed, and the sugar company filled in the lagoons. So what became of the migratory birds that had found refuge in the settling ponds?

To find the answer I travel out past the sad, skeletal remains of the old sugar factory to reach the impressive new visitor centre for Cabragh Wetlands Trust that has risen from the marshlands, and that is due to have its official opening soon.

I am greeted by Tom Grace, who has been a driving force behind the venture, and the project’s secretary, Adam Tozer. “Yes,” says Grace, “we did point out in 1989 that filling in the lagoons would result in the destruction of an important waterfowl habitat. Despite this they were filled, but in response we set up Cabragh Wetlands Trust, to save the remaining habitats. The trust bought natural wetlands adjacent to the lagoons, to ensure a continued wintering place for migratory fowl. Later, funding from the Leader programme and North Tipperary County Council allowed the excavation of new ponds, the creation of bird hides and the purchase of further wetlands.”

But how did the Cabragh initiative survive, and even prosper, when it is invariably so hard to fund environmental initiatives?

“Our first vision for Cabragh was that it would cover its costs as a pay-in attraction. However, we had to be very sensitive about this, as most likely some birds would leave the wetlands if large numbers of visitors were allowed access.

“So extensive fundraising was done by a small group of volunteers, which was supplemented by donations from Thurles Lions Club and others. This income subsidised the provision of our educational services.”

Ireland has lost so many wetland environments through land drainage and reclamation that several species of waterbird are now endangered, says Tozer.

“The curlew is a good example. From some 5,000 breeding pairs in 1990 there were fewer than 100 in 2014, with some experts suggesting the number could be as low as 60. The story of the curlew reminds us of how important it is that action was taken to preserve the wetlands of Cabragh and turn them into a reserve that provides a safe haven for waterbirds in perpetuity. Already we see the benefits, with increasing numbers of kingfisher, snipe and mallard in the wetlands, while recently the very rare marsh harrier appeared.”

“Ecological education is a huge growth area, and we see it as the primary way ahead for the project,” Jimmy Duggan, a retired school principal who is a long-time supporter of the trust, says.

“We have a very dynamic programme for first- and second-level schools, and now, increasingly, third-level colleges are taking an interest. For the last two years we have had a large group of students coming from Spain, to study English and ecology in the centre alongside Irish students, and this worked extremely well. This is a market we would certainly like to develop further.”

Grace says that a multidisciplinary approach, embracing ecotourism and, for example, field studies in botany and entomology, can also play an important role in the future of the project.

As we look out over Cabragh’s reed beds and water meadows, he talks about extending the wetland area, to broaden the range of habitats and provide sanctuary for endangered species such as curlew, lapwing and corncrake.

“Global warming is drying up many of the world’s wetlands, and so it is more important than ever to actively maintain diverse habitats for migratory birds, with clean water and balanced food sources. The breeding curlew’s rapid decline reminds us that small environmental changes can quickly devastate a species. It is only with managed environments such as Cabragh that the future of such species can be assured.”