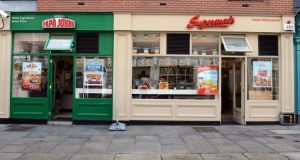 Fast-food chain Supermac’s has been ordered to remove the shopfront and signs from its Temple Bar outlet because they are too “traditional” in style.

Dublin City Council has said the unauthorised shopfronts of Supermac’s and its sister outlet Papa John’s at 26-27, Essex Street East, are inappropriate on what is an important thoroughfare through the conservation area of Temple Bar.

Supermac’s is appealing the council’s decision to An Bord Pleanála.

The company took over the premises formerly occupied by Hungry Harry’s fish and chip shop, which closed after it was twice refused permission to use the building as a takeaway.

Supermac’s changed the stone and steel modern shopfront on the 1990s building to a replica traditional front with ornamental columns and cornicing, and its corporate logo.

It made the change without seeking planning permission from the council but last April applied for permission to retain the shopfronts and signs.

The council refused permission. Its planner’s report said the use of a “reproduction traditional-style shopfront is inappropriate in this modern four storey building”.

In its decision the council said allowing the retention of the signs would be “seriously injurious to the character and amenities of this pedestrian street located in a conservation area and important tourist linkage route in the city centre”. As such it would be contrary to the proper planning and sustainable development of the area.

In its appeal to An Bord Pleanála, Supermac’s said its shopfront was made of wood with a “colourful presentation” that was much more in keeping with the street than the steel finish of the original building. The signage was a small element of the development and was “restrained in its handling” the company said.

An Taisce has supported the council’s position and said a fast-food chain restaurant was the “antithesis” of the Temple Bar cultural quarter.

It said there was a growing alarm about the condition of Temple Bar “with the proliferation of fast-food outlets and the loss of independent character being some of the main concerns”.

“The premises at 26-27 Essex Street is a modern building, intended to be distinct from the historic fabric of the area. The traditional style shopfront fitted is inappropriate in this regard and should be removed and the original shopfront with its stone facing and steel-framed windows and doors reinstated.”

Hotel restaurants, golf and tennis all in line for reopening but Government to warn ‘every contact counts’ 12:56
New charge of capital murder for Det Garda Colm Horkan accused 12:53
Water body backs EPA call for ‘decade of action’ on Irish environment 11:59
Coronavirus search: How is Covid-19 spreading in your locality? 11:52
Businesses can show ‘Dunkirk spirit’ by taking new direct ferry to France 11:46