Footage from Storm Frank in mid-December. Overnight, severe and damaging winds from Storm Gertrude have swept across the country. 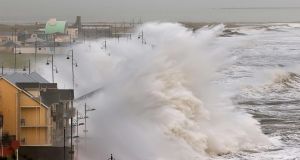 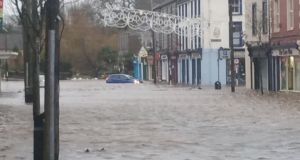 Midleton, Co Cork is under water on Wednesday morning after flooding caused by Storm Frank. Photograph: Padraig Hoare via Twitter 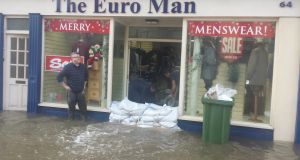 Emergency services remove cars on Wednesday morning which were abandoned in a flood in Glanmire, Co Cork between Sars and Marwood. Photograph: Alan Barry via Twitter 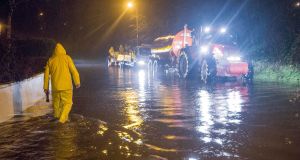 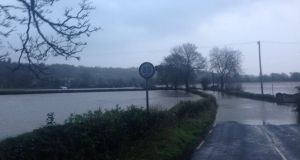 The Lee Rd near Carrigrohane which is impassable due to flooding on Wednesday after Storm Frank brought heavy rainfall to the area. At least four vehicles are reportedly stranded on the flooded road. Photograph: Random Cork Stuff via Twitter 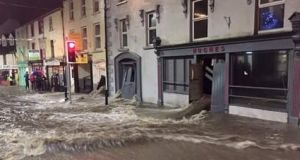 Water flows through buildings and down the street in Graignamanagh, Co Kilkenny on Tuesday night. Photograph: Paul B via Twitter

The torrential rainfall and strong winds brought by Storm Frank have caused localised flooding, road blockages and led to thousands of homes being without power across Ireland.

A Met Éireann status orange wind warning was lifted at 2pm on Wednesday although the forecaster cautioned that severe winds of 65-80km/h and gusts of up 130 km/h are still expected.

While the heaviest rainfall from this weather front fell overnight many rivers and lakes have yet to peak meaning further flooding is possible.

According to an ESB Networks spokesman 7,500 homes remain without power this afternoon, down from the overnight total of 13,000. He said repair crews were working to restore power to those cut off.

The biggest single outage overnight was around Bandon and Fermoy in Co Cork where 4,000 homes were cut off but power has been restored to almost all homes in this area, he said.

At 2pm on Wednesday the worst affected areas were Co Wicklow where 1,200 houses are cut off, Macroom in Co Cork where 600 are without power and Athlone where 500 homes are cut off.

Around 500 homes in Naas, Co Kildare are also cut off as are 350 houses in Skerries in north county Dublin.

A full list of faults is available on powercheck.ie.

People should not approach fallen power lines and should report any to 1850 372 999, he said. It is hoped that power will be restored to all customers by this evening.

Cork county appears to have been worst affected by the storm where 60mms (almost three inches) of rain has fallen since Tuesday morning.

The threat of further flooding in Cork remains as the ESB intends to increase the flow of water through the Inniscarra Dam to 250 cumecs (cubic metres per second) between 9am and midday on Wednesday leading to increased flooding downstream.

This is higher than the level of flow (180 cumecs) on Tuesday and between December 6th and 12th along the River Lee following Storm Desmond.

Cork County manager Tim Lucey said there had been “extensive flooding” across a range of areas but that Midleton and Bandon were worst hit with some 90 properties affected in each of the towns.

He told RTÉ Radio that one positive was the fact flood defences in Mallow and Fermoy had done their job. He noted that some five feet of water had built up behind a flood barrier in Mallow and this, he said, showed the damage that could have been done to the town.

South Galway bore the brunt of flooding in the west, with river gauges expected to rise further over the coming days. Overnight rainfall was not as heavy as anticipated in the west but several properties succumbed to the waters.

Up to 30 families in the south Galway area are still staying with relatives, with several being accommodated in hotels by Galway County Council, as floodwaters have cut off access routes to homes.

In Mayo, the area around the Neale is still underwater, and a number of minor roads are also affected- along with thousands of acres of farmland. With rain continuing to fall across the west on Wednesday, conditions are expected to remain critical over the next few days.

The N11 between Rosslare and Dublin, the N25 from Cork to Waterford, the N71 between Cork and Killarney and the N4 between Dublin and Sligo all have diversions in place.

There is severe flooding on the N40 South Ring Rd at J6 Kinsale, particularly on the westbound off-ramp. Motorway services are at the scene.

The N11 Dublin/Wexford Road is impassable through Enniscorthy and also at Kyle’s Cross near Oylgate.

The N4 is closed eastbound at Ballynafid in Co Westmeath due to flooding. The council have a stop/go system in place.

There are also several road closures in Kerry, Waterford and Tipperary.

Midleton was also hit by severe flooding as water levels in the Owenacurra river rose dramatically with up to 30 families having to be evacuated from their homes. Macroom in mid-Cork is also flooded for the first time this year.

Bandon was put on red alert by Cork County Council’s early warning system. Traders and residents were told to take all measures necessary to protect their property and stock.

The council warned that locals would get less notice of the flooding if and when it occurred than they did when the town flooded on December 5th.

Locals stayed up all night preparing the town for the latest round of flooding. Nevertheless, some 20 businesses in Bandon were flooded for the second time in a month after waters started to come up shores and gutters in the town as water levels in the River Bandon rose overnight.

The River Slaney burst its banks in Enniscorthy, Co Wexford and caused widespread flooding in the town. Several cars had to be abandoned.

High tide in Enniscorthy is expected around 10.30am on Wednesday.

A number of ferry sailings have also been affected by the bad weather. Intending passengers are asked to check with their ferry company.

A Status Orange warning is in place until 1pm on Wednesday with gusts of up to 120 k/ph.

Met Éireann is anticipating another storm following on closely behind Storm Frank. Storm Gertrude will be short-lived and will affect southern coastal counties. It is due on Wednesday afternoon.

Storm Frank began to make landfall in western areas on Tuesday, and while forecaster Evelyn Cusack said it would remain the main weather event over 24 hours, she said there will be a “sting in the tail” for western coastal counties for a period of around two hours on Wednesday which may require further weather warnings to be issued.

Limerick City and County Council said there has been no significant flooding in the county as a result of overnight rainfall but that water levels along the Lower River Shannon are continuing to increase. Water levels on the river rose by some 11cm at Castleconnell and Montpelier.

The ESB said the flow of water through Parteen Weir, which regulates water flow through Ardnacrusha dam, would remain at 440 (cubic metres per second) on Wednesday and that the situation would be reviewed again on Thursday.

“This level of water flow will have increased associated flooding to land and property in the vicinity of the Shannon downstream of Parteen Weir including the areas of Springfield, Montpelier, Castleconnell, Mountshannon (Annacotty) and the University of Limerick.”

Clare County Council said water levels on the lower River Shannon at Springfield, Clonlara, had increased by 5-10cm in the last 24 hours and were some 20cm below a peak level recorded on December 13th.

It said the Mulkear River in Co Limerick, which enters the River Shannon south of Annacotty, is currently in flood and is contributing to increased water levels at Springfield.

Council staff are being assisted by the Fire Service and Defence Forces at Springfield in their pumping operations and transporting residents of some 12 homes isolated by floodwaters.

Fianna Fáil has urged the Taoiseach to call an emergency Cabinet meeting to address the fallout from the storm.

The party’s environment spokesman Barry Cowen said many communities felt neglected as further significant damage was inflicted on homes and businesses by the rainfall and winds brought by Storm Frank.

“The scenes that we are witnessing in communities impacted by the latest storm are truly heart-breaking,” he said. “People feel neglected by the Government. It’s astonishing that the Taoiseach has decided not to interrupt his Christmas holidays in light of the devastation caused by Storm Frank.”

The Government’s National Coordination Group on Severe Weather has been meeting in Dublin on Wednesday.

Sinn Féin MEP Liadh Ní Riada said the Government had displayed “ineptitude in preparing flood defences” and that “ more hollow promises” from the Coalition were no substitute for action.

“The risk of flooding is increasing and will continue to increase. People across this island need to know that our political leaders have a plan to prevent this happening in the future,” she said.