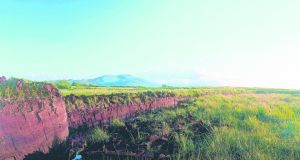 The Iveragh Peninsula’s location between the Kerry Mountains and the Atlantic Ocean provides natural protection against light pollution.

An area of southwest Kerry has been designated as a dark skies reserve, the first place in the Northern Hemisphere to receive such a designation.

The International Dark-Skies Association found that the skies of the Iveragh Peninsula, an area measuring 700sq km, should be designated a dark-skies reserve.

The area is now Gold Tier Dark Sky Reserve. Only two other places in the world, in Namibia and New Zealand, have received such a designation for their pristine skies.

The accolade makes the area attractive to tourists who want to see the night sky without it being affected by light pollution.

The decision follows a two-year campaign by the Kerry Dark Sky Group which has been supported by Kerry County Council and Fáilte Ireland.

The new reserve sits on the Iveragh Peninsula, home to 4,000 residents.
Its location between the Kerry Mountains and the Atlantic Ocean provides some natural protection against light pollution. In addition, several towns and villages in Co Kerry enacted laws requiring responsible outdoor lighting practices.

The designation is highly prized and the county council has pledged to maintain it by replacing existing street lighting with dark-sky friendly light fixtures.

The dark-skies designation will also be part of the Wild Atlantic Way programme.