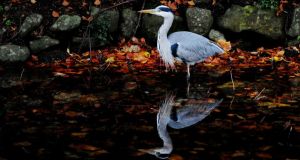 “Birds such as the heron are protected, so shooting a heron is a crime - I have never come across a heron being shot before but we would strongly condemn it,” Birdwatch Ireland development officer Niall Hatch said. File photograph: Aidan Crawley/The Irish Times

Birdwatch Ireland has condemned the shooting dead of a heron in Co Cork and urged anyone with any information to contact the wild life service or gardaí about the incident.

Birdwatch Ireland development officer Niall Hatch said the killing of the heron in Macroom Town Park was particularly disturbing given the bird is a protected species.

“All Ireland’s wild birds are protected under the Wildlife Act 2010 - it is possible to hunt some birds such as ducks and woodcock under licence at certain times of the year.

“But birds such as the heron are protected, so shooting a heron is a crime - I have never come across a heron being shot before but we would strongly condemn it.

“And we would urge anyone who may have any information about the shooting of the bird to contact the National Parks and Wildlife Service or the local gardaí in Macroom.”

Mr Hatch said that herons, which live off fish in rivers and lakes, are unusual for water birds in that they nest high in trees and records have shown that they can live for up to 25 years.

Gardaí in Macroom confirmed they were notified of the shooting of the bird, which happened four weeks ago on the banks of the Sullane river in the town park.

The incident was highlighted on Tuesday by a caller from Macroom, Pat Murphy, to the Neil Prendeville Show on Cork’s Red FM.

Mr Murphy said the heron was a regular sight on the banks of the Sullane for anyone walking in Macroom Town Park, and people were shocked to discover it had been shot dead.

According to Mr Murphy, the heron had not been seen for some time in the park before it was found dead from gunshot pellets by a pensioner walking in the town park.