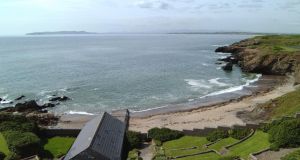 The beach at Portrane: Fingal County Council has advised the public not to swim at several north Dublin beaches due to health concerns over water pollution

Swimming has been stopped at some of Dublin’s most popular beaches following the failure of sewage pumping stations across the north of the county. Fingal County Council has advised the public not to swim at 12 beaches due to health concerns over water pollution. Results of microbiological tests due today will determine whether a swimming ban needs to be extended into the weekend.

The beaches affected are at the main beach and Hampton Cove in Balbriggan, Loughshinny, Skerries north and south beaches, Balcarrick beach in Donabate, Brook beach and Tower Bay in Portrane, Malahide beach, the Velvet Strand in Portmarnock and Burrow and Claremont beaches in Howth. Red flags have been placed on them, with blue flags taken down from Balcarrick, Portrane, Skerries south beach and the Velvet Strand.

Principal environmental health officer with the council George Sharpson said the heavy rains last weekend had led to the failure of a number of pumping stations around the county.

“The pump stations are located all along the coast and they keep the sewage flowing to the wastewater treatment plants. But these became supercharged with floodwaters from the rain – the pumps simply couldn’t cope with the sheer volume of floodwater – so it had to be let out straight on to the coast.” The choice was either to discharge the sewage water into the sea or allow it back up into people’s homes, Mr Sharpson said.

One of the main pumping stations that broke down was at Issac’s Bower, Balbriggan, the same station which failed in August 2012 resulting in E.coli contamination five times the upper limit for safe bathing waters at Balbriggan beach.

Fingal’s sewage network had undergone “huge infrastructural upgrades” in recent years, Mr Sharpson said. This work was being continued by Irish Water, which last month began an upgrade of the Dublin Road pumping station at Balbriggan. However, he said, while upgrades could reduce the number of pollution incidents, it was not economically feasible to engineer the pumps to eliminate the possibility of sewage overflow during flash floods.

A new €500 million regional sewage treatment plant to serve up to 700,000 people in north Dublin and surrounding areas is to be built at Clonshaugh near Dublin Airport. The plant is designed to have on-site power generation and overflow storage capacity to mitigate against local pump failures. It is expected to significantly improve water quality but will take several years to develop.