Plans to export wind energy generated in Ireland to Britain have been described as ‘selling the family silver’, but what would this new export industry mean for employment and the environment? 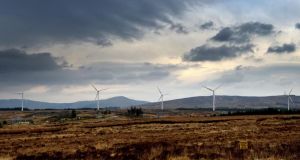 Plans to pepper the Irish midlands with giant wind turbines exporting the electricity they generate to Britain are not driven only by Tory concerns about a popular revolt in the English shires against wind-energy projects. They are part of a much wider agenda to reduce Europe’s dependence on Russian gas and oil.

Everyone remembers with a shiver when Russian energy giant Gazprom cut off the gas supply to Ukraine on January 1st, 2009: and then Vladimir Putin extended the ban to gas being piped through the former Soviet state to Hungary, Slovakia, Greece, Turkey, Bulgaria Romania, Bosnia, Serbia and Macedonia.

In freezing winter weather, Slovakia declared a “national emergency”, Austria and Italy reported that their supplies of Russian gas had fallen by 90 per cent, and France and Germany were also hit by Putin using gas as a political weapon. The London Independent heralded it as a “new cold war in Europe”.

The EU imports one-third of its gas from Russia, of which 80 per cent is pumped through Ukraine. In 2007, four EU member states – Estonia, Finland, Latvia and Lithuania – were 100 per cent dependent on Russian gas, while France and Germany were its largest importers, accounting for almost half of the EU total.

The rest comes primarily from Norway, which is perceived as highly reliable, and Algeria, which isn’t. But the EU is so dependent on imports of both oil and gas, it needs secure supplies. A proposed pipeline to Europe from Iran is not on the agenda because of sanctions against Tehran relating to its nuclear programme.

Hence the importance of the Supergrid, an EU initiative to integrate renewable energy production across Europe – to “decarbonise” electricity generation, allow power to be traded between one country and another, strengthen energy security and create opportunities for European companies to export their know-how.

The core elements of the Supergrid would consist of concentrations of huge offshore wind turbines in the North Sea, the Baltic Sea and the Irish Sea. These would ultimately be supplemented by vast arrays of solar-power generators in the Sahara and by wave- or tidal-energy installations, now being tested at a micro level.

A report in 2010 produced by the European Climate Change Forum, the Potsdam Institute for Climate Impact Research, the International Institute for Applied System Analysis and global accountants PwC even put forward a realistic roadmap to achieve “100 per cent renewable electricity” in Europe and North Africa by 2050.

Since 2009, the EU has been committed to boosting the share of renewables in the energy mix to 20 per cent by 2020, both to make a contribution to combating climate change and cut back on Europe’s dependence on imported oil and gas. Both Ireland and Britain face real challenges in meeting their targets under this programme.

Most member states are expected to meet their renewable energy obligations, without imports or statistical transfers of what are called “Guarantees of Origin” that the electricity being sold has been produced from renewable sources. Britain does not expect to reach its target without buying substantial amounts of wind energy from Ireland.

That’s why Britain’s secretary of state for energy, Ed Davey, cosigned a memorandum of understanding with Minister for Energy Pat Rabbitte, in Dublin, on January 24th, to pave the way for an intergovernmental agreement on the export gigawatts of green energy from Ireland to Britain; this is expected to be finalised in 2014.

With two energy companies, Element and Mainstream, eyeing vast areas of cutaway bog in the midlands as the likely locations for at least 2,000 turbines producing up to 8,000 megawatts of electricity for export to Britain, the deal couldn’t come at a better time. And the two companies will play a role in putting flesh on it.

What needs to be teased out, according to Rabbitte, are “very complex engineering and market issues” including, as an appendix to the memorandum notes, the costs and benefits of energy trading for both Ireland and Britain as well as subsidy levels, interconnector options, and regulatory andlicensing issues.

After the two governments committed to this “programme of work”, Rabbitte said: “Ireland has the potential to generate far more wind energy than we could consume domestically. The opportunity to export this green power presents an opportunity for employment growth and export earnings which we must seize if we can.”

As for what this new “export industry” could mean for employment, a press release from his department suggested a 3,000-megawatt project would generate “in the order of 3,000 to 6,000 jobs” during the construction phase and an unspecified number of jobs in “ongoing maintenance” of turbines over a 20-year period.

“Further employment opportunities could also arise in both countries from the manufacture of turbines, cables and other technology,” it said – without mentioning that none of the components of the 1,200 wind turbines installed here so far (towers, blades, nacelles, gears, generators and other parts) were made in Ireland. Or, at least, in the Republic. Belfast’s Harland & Wolff shipyard has diversified into producing turbines for offshore wind farms such as Robin Rigg, off the west coast of Scotland, and another in the Irish Sea, off the Lancashire coast. With so many more turbines planned here, a local manufacturing facility is essential.

Compared to the midlands, where there is likely to be a large number of objections, offshore wind farms in relatively shallow Irish waters offer the best opportunity to export energy to Britain. Two major projects are planned, at Codling, off Co Wicklow, and at Oriel, off Co Louth, in addition to the expansion of the Arklow Bank wind farm.

Although developers of offshore installations receive no equivalent of the subsidy for domestic wind, their projects have been designated as export opportunities, and they should also be easier and therefore quicker to deliver, even at greater expense, because offshore turbines are generally regarded as easier on the eye.

Rabbitte has said it is “far too soon” to make final judgments on which of the export-orientated windfarm projects now being mooted will be approved and under what terms. “There is no fait accompli at this stage,” he said, adding that he favours a “plan-led approach” and a “transparent process for project selection”.

None of this has reassured objectors, who are concerned about the noise and visual impact of onshore turbines and also see the export of wind energy to Britain as equivalent to “selling the family silver”. But, as one developer said, “Selling ‘family silver’ will occur, but it’ll be sold at market value.” And, in any case, it’s renewable.

“The shouting has started far too early. Wait and see what’s proposed in the flesh and how it looks in the landscape, and weigh its effect up against the societal benefits of decarbonisation, revenues and jobs. Maybe the disadvantages do outway the advantages, but it'’ll take detailed analysis . . . to determine that,” he said.


Striking a balance
To promote consensus on renewable energy, some of Europe’s leading environmental organisations – Friends of the Earth, Greenpeace, BirdLife and WWF – signed a joint declaration with major energy producers in November 2011, aimed at striking a balance between grid development and nature conservation.

“To integrate a large share of new variable renewable electricity in the energy system, Europe’s powergrid must be strengthened and expanded. Areas with large renewable energy resources, onshore and offshore, in the EU and in neighbouring countries, must be connected to the demand centres where people live and work,” the declaration states.

It pledges to “promote public support for necessary infrastructure development by enhancing transparency on the reasons for grid development, including on realistic and reasonable alternatives, and by promoting access to environmental information and public participation, in the spirit of the Aarhus Convention”.