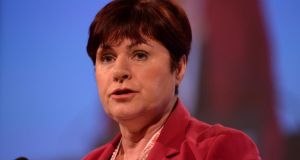 Minister of State for Rural Economic Development Ann Phelan: “It’s a start. In the world that I come from, €30 million is a huge amount of money and incredibly hard to get.” Photograph: Cyril Byrne

A €30 million package to revitalise rural communities worst hit by the recession has been announced by Taoiseach Enda Kenny.

The money, to be dispersed over six years, has been made available to improve the attractiveness and sustainability of towns and villages. The funds will be set aside in the Capital Spending Plan which is to be announced next week.

The works will include new cycle ways and civic areas, upgrades for parks, improvements to street lighting and walking paths. They will be carried out under the Village and Town Renewal Scheme

Other improvements allowed under the scheme include small scale site acquisitions for redevelopment, remedial works and enhancement of site infrastructure.

He said the Government was committed to ensuring rural areas benefitted from the economic recovery, but admitted the €30 million scheme “won’t do a lot” on its own. “€30 million is a recognition of potential here, it’s not going to solve all the problems, by any means,” he said.

Mr Kenny acknowledged there was a two-tier economic recovery taking place with urban areas growing much faster than rural ones.

“While the recovery is significant, its benefits are not yet being felt as deeply in rural communities as in large urban areas, and to some extent that is inevitable,” he said.

The Taoiseach said he hoped the capital plan would address “infrastructural blockages” in rural Ireland.

Minister for Environment Alan Kelly said developing and maintaining a vibrant rural economy was of national importance. “Rural Ireland will not be abandoned by this Government,” he said.

Minister of State for Rural Economic Development Ann Phelan said she was confident the scheme would make a difference to some of the towns and villages that were struggling.

“It’s a start. In the world that I come from, €30 million is a huge amount of money and incredibly hard to get,” she said. “This is to bolster communities. They have to identify what they want themselves. They’ll each have to apply and make their own case.

Ms Phelan said people living in rural areas areascommunities should have access to services equal to that of urban residents.

“Our vision for rural towns, villages is of vibrant, inclusive, well-maintained, economically thriving areas with residential communities balanced in demographic terms with regard to age and gender,” she said.