Rodent season: ‘If you can poke a biro through a hole, a mouse can get in’

It’s the time of year when mice and rats head indoors, and experts say there are more on the move than usual 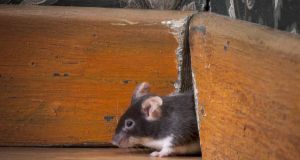 Mouse in the house: ‘The biggest give-away is hearing them going across the ceiling. It’s a distinctive sound: the click, click of the claws, and then the sound of the tail slapping on the floorboards’

It’s often when you’re lying in bed, in the quiet of night, that you hear it: the tell-tale scratch and scurry, amplified in the silence, that announces the presence of rodents in the house. If you’re lucky, they’ll be mice. If not, you’re dealing with a much wilier and more malignant invader: the rat.

As temperatures fall, now is the time that rodents are making a determined incursion into our homes, looking for a warm and dry base to dig in for the winter. And according to Wexford-based pest control expert Diarmuid Bolger, there are even more of them on the move this year: “The hot summer meant fantastic breeding conditions for mice and rats. Now they’re abundant, and because the cold snap came quickly, everyone has been caught out. People haven’t had a chance to proof their homes properly.”

Even the smallest crack or crevice can allow a rodent to squeeze in. “If you can poke a biro through a hole, a mouse can get in,” says Bolger. “If your thumb can go through, a rat can get in. Rodents can actually elongate their bodies to get into tight spaces. A mouse can even dislocate its jaw, if necessary.”

According to Phil Bowman, a pest control specialist in Belfast, there are several common entrances used by rodents, gaps around service pipes being the number one access point.

If you have a garage adjoining your house with an up and over door, mice can easily squeeze in around the sides. Feeding wild birds at a bird-table in the garden, close to the house, or even on window-sills, is asking for trouble, since mice are attracted to the nuts and suet balls just as much as birds.

Open-door policy
But Bolger says that many rodents come in the same way we do: straight through the door. “Kids leaving doors open is a big problem. You can see how it happens: it’s night-time, when rodents are active, you send the kid out for a bucket of coal, he leaves the light on and the door open, and there you go – they’re in. It only takes a moment. These creatures are opportunists.”

Once in, “they go for quiet, dark places,” says Bolger. “Behind the sink, in the hot press, up to the attic. Mice won’t roam far: they will generally stick to within 10m of the nest. So if you see one, you know the nest is fairly near.”

Being curious by nature, they will eat absolutely anything, though some foods are more tempting than others. Cereal-based dog food, in particular, is a real delicacy for mice and rats, and the strong smell of it will bring them running.

Having eaten their fill, the next step is to start breeding. Fast. “Say a heavily pregnant mouse comes into your house,” says Bolger, “the gestation period is 21 days, and she’ll have a litter of 7 or 8, coming to maturity at 6 to 8 weeks. That’s a lot of mice.”

And while they may look cute to some, their domestic habits are anything but, even apart from the droppings and the damage. “Mice are incontinent,” says Bolger, “so you do get a constant dribble.”

You’re less likely to encounter rats in the house, but if you do, it’s a much bigger problem. “Rats are destructive,” says Phil Bowman. “They’ll head for the attic and start chewing plastic off wiring, setting off burglar alarms, tripping fuses. They’re craftier and cleverer, and that makes them harder to catch. Rats are also neophobic, which means they are suspicious of anything new. If you set a trap for them, they’ve been known to step around it for up to 30 days.”

Several pest-control experts say that lazy building practices during the boom years are contributing to rat infestations now. “Properties were built very quickly,” says Bowman, “so you see things like soil pipes not being put in properly, the joints come apart, and then you get rats coming up out of the sewers. They can go through an entire apartment block that way; you can find them running about on the ninth and 10th floors.”

humane league
Poison is often the default option for getting rid of rodents, but due to its risks to children and pets, that’s safer left in the hands of the professionals. In the case of mice, soft-hearted home-owners are often tempted to try placing humane traps, which operate on a see-saw mechanism, trapping the mouse inside when it comes to investigate the bait – in theory.

But it’s difficult to catch mice this way, and if you do, you’re faced with the problem of what to do with the live trapped mouse. One professional exterminator told me about a client who drove imprisoned mice out into the country to set them free, before realising that his efforts were making no difference whatsoever to the rodent population taking over his house.

“You’ve got to be realistic,” says Marcus Giusti, of Total Pest Control in Dún Laoghaire. “Mice breed at an awful rate. Even if you use the ordinary traps, they just lift the bait off them and run away. So you maybe kill one every two weeks. It’s not enough to get on top of the problem.”

When it comes to rats, the populations have become so established that Giusti has invested in special underground cameras to find breakages in pipes, in order to block off the rodents’ access route at source.

So in the absence of sightings, how do you know if you have a mouse or rat infestation? “The biggest give-away is hearing them going across the ceiling,” says Phil Bowman. “It’s a really distinctive sound: the click, click, click of the claws, and then the sound of the tail slapping on the floorboards.”

And if that nightmarish thought doesn’t send you rushing to rat-proof your property, it’s hard to know what will.