After severe flooding in 2009 Teresa Brady found it impossible to get insurance. Now, after Storm Desmond, her house in Corofin, Co. Galway, is under threat. Video: Ray Ryan 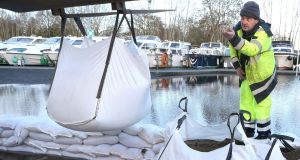 The River Shannon catchment area could experience its worst flooding in 20 years over the coming days as water levels continue to rise from the impact of Storm Desmond and more rain makes its way across the country, according to the Office of Public Works (OPW).

Members of the National Emergency Co-ordination Committee met on Tuesday to review the ongoing threat of flooding following the weekend’s severe weather.

Jim Casey from the OPW told the committee the area “giving most concern” was the Shannon catchment.

“In fact, all of the gauging stations on the Shannon are showing increasing levels since yesterday and over the past few days,” he said.

“Levels in the lower Shannon catchment – which would obviously affect urban areas in Limerick City and up to Lough Derg and Athlone – are rising and expected to peak on Friday and Saturday.”

He said spring tides this weekend would raise the water level on the river by about half a metre.

“Coinciding with the fluvial flood wave coming down the Shannon, that’s going to cause a bit of concern,” he said.

“Just to stress, those flood events are in the severe category. We classify a severe category as a return period of greater than 20 years. There is evidence of some localised flooding on the Shannon basin and that will get worse over the coming days.”

Committee chairman Seán Hogan said flooding in many other parts of the State were improving, with 22 “points of concern” on Monday reduced to 15 on Tuesday.

“But we still have a risk of flooding in many areas,” he said. “Water levels are stabilising in a number of rivers and falling quite rapidly in places that caused problems over the weekend.

“One of our big concerns here is the risk to life. The Shannon is slow and gradually builds up inch by inch whereas some of the rivers where flash floods have developed can be very dangerous for life. We’re advising people to watch out for those situations.”

Mr Casey said that following a record river level for the River Moy catchment in the northwest on Monday, it had peaked and was “now falling steeply”. The River Erne catchment however was “still rising” and “likely to continue doing so” over the coming days.

Tom Browne from the ESB said it had increased the flow of water down the Shannon at Parteen Weir as flood waters continued to rise.

“The flows down the old Shannon River downstream of Parteen Weir have been increased to 375 cumecs [metres cubed per second], from a rate of 315 cumecs on Monday,” he said.

“As the water in Lough Derg continues to rise, an increase in the level of water flowing down the old River Shannon will be required over the next number of days.”

This increased volume of water was “likely to lead to associated flooding” of roads, land and property in the vicinity of the old River Shannon downstream of Parteen Weir.

Affected areas include Springfield, Montpelier, Clonlara, Castle Connell, Mountshannon, and the University of Limerick. He added water levels will also “continue to rise” in the Athlone area over the next few days.

He added there was a boil water notice in place for more than 10,000 people in Ballinasloe after treatment plants were compromised by flood water. Flooding has also caused the Bundoran water treatment plant to be shut down.